Over the years my job has taken me to places all over the world; Europe, Asia, Africa, South America, Middle East and Down Under.  On my bucket list of places to at least visit once has been Paris and Rome so while in between jobs in May, my wife and I decided to take a trip to Paris and Zurich.  We opted for Zurich because it was pretty much free and free is always good.  My sister is a Cardiologist and had been invited to study at the University of Zurich for the whole month of May.  Being the nice brother that I am, I decided to crash her two bedroom apartment in the heart of the city.  Nice....right? 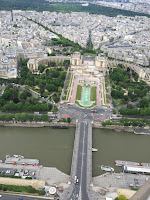 My wife and I only spent two days in Paris so it was a speedy trip doing the major sites over the course of those two days.  I did manage to sneak in a visit to Maison du Whisky and boy was that an experience.  The selection was overwhelming but once I got past all the things I couldn't or wouldn't 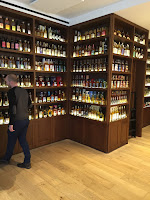 afford I was able to down select to a reasonable number of nice bottles.  I spent the better part of an hour with a very nice salesman who happened to be from middle U.S. so there was no language barrier issues.  He was helpful and informative and led me to some very nice items I ended up purchasing.  One item on my "hope to find" list was a Nikka Miyagikyo 15 year which just so happened to be sitting on the shelf among the Japanese selections.  Next up, a Nectar of the Daily Dram 14 year Irish (at a very nice 103pf) and then finally a Signatory 24 year cask Highland Park. Truth is, I could have selected three different bottles and been just as happy since the offerings were broad and varied.  I did manage to avoid buying the Karuizawa 31 year cask bottle at around $9,000.

Overall Paris was nice, the sites were fun to visit but I'm not sure I'll be visiting again.

For those that have not traveled to Switzerland, you're missing out.  As I mentioned, I've been all 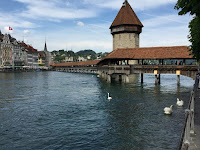 over the world but no place in my previous travels compares to this beautiful country. We spent the better part of the week doing some sightseeing around the city as well as visits to other destinations.   We visited the beautiful city of Lucern with Chapel Bridge as the focal point which was built in the 14th century.  While in Lucern we took the Golden Tour which starts with a boat ride on Lake Lucern, then to a Rack Railway that takes you to the top of Mount Pilatus.  While the railway was pretty slow going, the ascent was steep sometimes at a 48% grade.  The wife was not happy.  After reaching the peak and having lunch, we took the gondolas to the bottom.  The highlight of the week  was a visit to Interlaken and then a final destination of Jungfraujoch also called "The top of Europe" with an elevation of just under 12,000 feet.  It was an amazing experience and the view was spectacular. 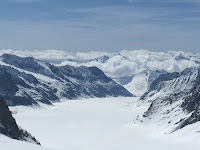 I avoided drinking on this trip as the elevation was messing with my head and respiration so I avoided anything that would put me under.  While there I did buy a small bottle of Interlaken Swiss Highland SMW which was simply a novelty.  Back in Zurich we made a point of stopping by Old Crow bar that has a very diverse whisky collection; many old out of production bourbons and rye's.

Finally, I did manage to get out and do some whisky shopping (of course!) and fortuitously Glen Fahrn whisky shop was just around the corner from the apartment.  As a whisky enthusiast, Glen Fahrn was stocked with some great selections which made shopping fun.  They had many current release offerings along with plenty of independent bottlings.  I opted for two bottles that really intrigued me.  Teeling offers a standard Irish whiskey here in the U.S. that is aged in rum casks for 6 months.  It's a nice enough expression but I

knew that Teeling had many single cask labels finished in various casks.  The two I found at Glen Fahrn came home with me.  First a 13 year Port finish at 56.7 ABV and a 13 year Carcavelos finish at 56.6 ABV.  This shop had some great staff and they allowed you to try before you buy so of course I took my time tasting before deciding. 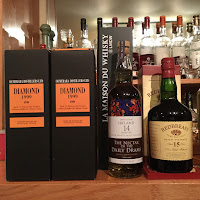 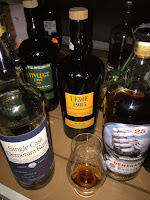 Since my brother in law was also in Zurich the two of us traveled to Baar to visit a fellow whiskey enthusiast who is a member of our whiskey group.  We had a great meal at a local brew pub and enjoyed some schnitzel and bratkartoffeln.  Back at my buddy's house we spent the evening diving into some great Willett selections, Michters 10 yr bourbon and some fantastic Velier cask strength rums.  Facilitating a trade, I ended up bringing home an early release of Redbreast 15 and two Diamond 1999 Demerara 15 year old rum.


It was a fantastic trip and I ended up with some great selections for the bunker.
Posted by Greg at 11:42 PM