Back late last year and then in the New Year I mentioned that I was going to attend a whiskey throw down. Well after snow storms, illness and conflicting schedules, we finally came together and completed the task of going head to head between bourbon and Irish whiskey. It all started when my wife's Aunt started talking smack about bourbon and how it was for mullet heads with wife beater shirts. She said Scotch and Irish whiskey were a more "dignified" drink. Of course, I stepped up nose to nose and accepted the challenge.

About 10 family members got together and I began the process of explaining the origins of bourbon and the different recipes one can encounter when purchasing bourbons. I started off the sampling with an '88 Weller Special Reserve. This particular bourbon comes from the famed Stitzel We

ller distillery and is of course a wheated bourbon at 90 proof. A wonderful example of a soft yet flavorful bourbon. My second sample was Sazerac Rye (Baby Saz) in order to provide an example of the opposite end of the whiskey spectrum. Third offering was Old Charter 12 year "Classic 90" which is a high corn bourbon (86%) so they could experience this type of bourbon. The last was a Wild Turkey 101 8 year so they could taste a high rye bourbon. Going through this type of progression gave everyone a new understanding and appreciation for bourbon as their thinking was somewhat one dimensional (think mullet). Now, I know the Saz is not bourbon but my intention was to go from one extreme (wheat) to the other (rye) so they could understand the unique and diverse nature of American whiskey. After the first round, I brought out the big guns; 2007 George T. Stagg at a whopping 144.8 proof and a Thomas H. Handy a slightly less 134.8 proof. My wife's Aunt took a sip of the GTS and I think her eye's spun around inside her skull and I watched with muted satisfaction at her discomfort.

At the end of the evening, my wife's Aunt and others expressed surprise at the uniqueness of bourbon and declared undying allegiance to bourbon to the end of their days (ok, I made that last part up). So, in the spirit of fairness, we broke open the two Irish whiskey my wife's Aunt brought and I'll have to say, she too brought a big gun. The first was Paddy's Old Irish Whiskey which is triple distilled and aged in oak for up to 7 years. It's blended to ensure its softness yet deliver enough flavors to make it appealing. This it does in an engaging fashion as I instantly liked this particular whiskey. Unfortunately, Paddy's is not sold in the U.S. The second Irish presented was a Bushmills Millennium. Curse Auntie for bringing such a stellar example of an Irish whiskey. My 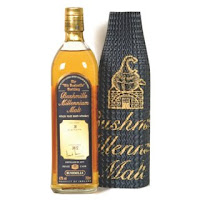 thoughts of whiskey domination were now in serious jeopardy. The Bushmills Millennium is a 24 year old whiskey, distilled in 1975 and bottled for the Millennium in late 1999. This whiskey was unlike any Irish I had ever tried delivering heaps of honey and malt. It was never overpowering but well balanced and perfect. At the end of the evening Auntie generously gifted both the Paddy's and Bushmills to me and I in return, gifted her a Pappy Van Winkle 15 year. I've found my new favorite Irish whiskey; unfortunately, it can't be found anymore so I'll have to nurse this bottle over a long period of time.

I can easily declare victory over the Irish but only because that's how it is in my world, plus Auntie will never know that I did so.