Back in February I wrote a piece on the soap opera called Old Weller Antique.  This past Friday our group settled in at 10:00 a.m. to taste through 12 samples of OWA.  As I mentioned in previous posts, our group was offered a younger OWA for this tasting which turned out to be 6 year 4 months old.  My feeling was that this was an opportunity to try the BT wheated mashbill at a younger age and and see how it compares to our 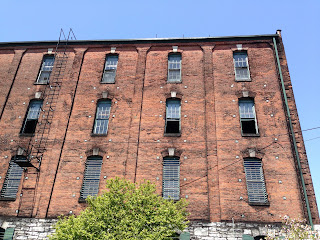 previous picks that were older by as much as 18 months.  BT again accommodated our request for samples to be pullled and proofed at 107 so we could sample at bottling strength....so, thank you Beau Beckman.

As we began tasting the samples, it was clear, at least to me at the time that we were afforded another set of very nice samples.  I tuned in on three specific samples that really stood head and shoulders above the others.  Other samples exhibited short finishes, thin mouthfeel or dry and tannic entries and those were quickly dismissed on my list.  The top three I identified exhibited great noses, big sweet entries of rich caramel, candied fruit, creamy mouthfeel and long lingering finish.  After all were done tasting we tallied up the votes (again, silent voting so there would be no undue influence) and my top pick, barrel #12 was the #1 pick of the group so it clearly was a favorite.

My hat is off to Buffalo Trace for again taking the time to host our group and also provide some great bourbon for sampling.

We spent the afternoon grabbing a bite to eat and then visiting the Getz Museum.  If you have been to Bardstown or have plans to visit at some point, I would encourage a visit to the Museum.  It has some great examples of old bourbon, bourbon history and some very nice displays.  I ended up buying their book "Whiskey; An American Pictorial Book".  If you do visit, please make sure you give a small donation as the museum is free.

It's a brisk morning with a high of 41 and we're milling around outside the gate of Cox Creek.  After a few moments the security guard opens the gate and asks if we know where to go and of course we do.

We head to the bottling house and upon entering see the tasting stations set up with 8 glasses at each station.  Because of the size of our group, we have to double up so we can't be too concerned with cooties.  Next to the tasting stations are 8 barrels lined up bungs facing upwards ready for sampling.

Master Distiller Jim Rutledge arrives and we waste no time popping the bungs off the barrels and using the whiskey thief, begin pulling samples from the barrels.  As we start nosing the samples it 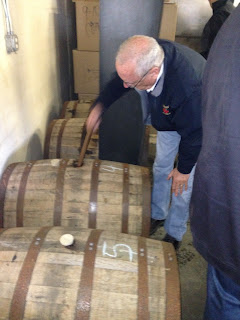 quickly becomes apparent that these barrels show great promise with some profiles showing fruit and cream.  We take our time rotating through each sample making notes as we go along attempting to narrow down the top three.  We're supposed to keep our impressions to ourselves as this is a secret ballot and which ones each person likes but looking around the tables quickly tells who likes what by facial expressions and the fill level of some glasses.

After the votes are tallied we picked two barrels that were clearly the favorite of the group; an OBSO at 9.5 years old and a OESO at 10.5 years old.  We don't know the proof of either just yet.  The OBSO was a first for us as we've never picked this particular recipe and the OESO is our second.  The third favorite was an OESV at 9 years old.  Quit a bit of discussion was generated around this barrel after we left and it looks like we'll end up picking up that barrel as well.  That OESV was the sweetest Four Roses I've ever tasted.

We leave Four Roses and head to Buffalo Trace up in Frankfort.  After lunch we arrive around 1:00 and head to Warehouse H which has the tasting room.  We walk in and 10 barrels of Elmer T. Lee are 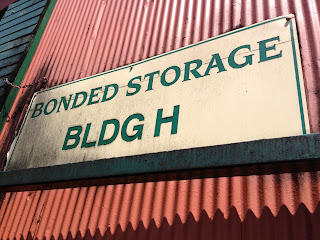 lined up in pretty fashion and BT had already pulled samples into two sets of glasses for each barrel; one glass at barrel strength and one glass at bottling strength.  I'll have to admit that I have not been a fan of Elmer T. Lee over the years finding the flavor profile not to my liking.  Now, since the ETL is a single barrel offering there are going to be variances in drinking experience but my own experience has been more miss than hit. 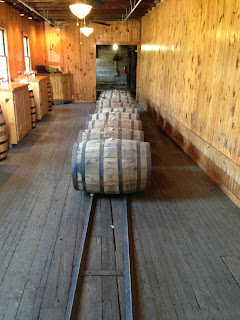 focus on the samples cut to bottling proof.  As I make my way through each sample I'm having difficultly finding one that really stands out.  In fact, there were a couple of barrels that were pretty much undrinkable.  In the end, for me, I really didn't find anything that I would want to pull the trigger on but since the process was to vote on your top three, I provided those that I thought were the best of the eight. I will point out that Beau Beckman from BT does a very nice job putting together the tastings and we always enjoy visiting (and purchasing) from BT.

Overall a good day and I think we picked some of the best Four Roses to date.
Posted by Greg at 9:12 AM 2 comments:

Does anybody else hate flying?  The process used to be fairly simple and straightforward.  Now it's an exercise in patience.

Visiting the Blue Glove Brigade at Dulles Airport wasn't too bad as I made it through security in about 20 mins.  Since I had an hour to burn, I met up with two flying companions for a beer and light meal before the flight.  Ok, no problem so far.

We finally arrive at the hotel around 9:00 and check-in.  The hotel has always treated us well and provides a small meeting room for us to set up our bourbon table and have a place to socialize.  It was good seeing familiar faces as well as new members.

Fun kick-off evening with my very enjoyable pours consisting of Elijah Craig Cask Strength; not too sweet, big profile of barrel notes and semi bitter chocolate, moderate heat.  I actually liked this more than I thought I would.  Next up Wild Turkey Russell's Reserve 10 year 101; a favorite of mine....nuff said.  Following the Wild Turkey a dusty Fighting Cock 103; very tasty, viscous and wish I had some of my own.  Fourth pour was a 1970 Old Fitzgerald Prime 7 year; how I wish  they made bourbon like this today....oh well, a highlight of the evening with that classic Stitzel Weller Toffeenut and Cherries.  For the last pour of the evening, we grabbed a dusty ND Old Grand Dad 86 proof and retired to the patio for an evening cigar.  About 8 of us ended up outside in the brisk evening smoking cigars, picking on each other and sipping some good old school bourbon.

Tomorrow 9:00 we'll be at Cox Creek tasting through Four Roses.
Posted by Greg at 6:48 AM 2 comments:

This Wednesday I'll be boarding a flight to Louisville and then driving to Bardstown.  The schedule is set for this years convergence on Bourbon Mecca.

Besides tasting through a god aweful amount of bourbon at the distilleries, we each also bring a bottle to share in the evenings.  Last years theme was "only damn good bourbon"  and boy did we have some fine bourbons show up.  Old, new, you name it, we had it.  I brought along a Rock Hills Farms that Julio's Liquor did back a number of years ago; it was a big cherry bomb and it got hit pretty hard over the course of 4 days.

This years theme is a play on last years; "only damn fine malt".  That's right, all of us bourbon dorks are sliding to the dark side.  The list is pretty impressive and I'm excited to hit a number of those bottles as most of the selections are ones I have not tried.  Originally I was going to bring along a Springbank 12 year finished in a Claret cask (and cask strength to boot) but there were already two other Springers on the list so I changed my offering to a 2006 Arran Malt Cask finished in a Gonzalez Byass Cream Sherry cask.  There's no age statement but it's a terrific Scotch with a profile of apples and tropical fruits.  It drinks fantastic at cask strength.

It will be a busy schedule with the first distillery being Four Roses first thing Thursday morning.  Nothing like drinking bourbon at 9:00 a.m.  That afternoon we hit Buffalo Trace and then BT again most of Friday as we're tasting through a number of various selections.  Saturday we'll be visiting Drew Kulsveen at Kentucky Bourbon Distillers (KBD).  Saturday afternoon we'll converge on a friends house for an afternoon and evening of BBQ, beer, bourbon, malt and cigars.

I hope to come back home on Sunday with a sense of what we should expect in delivery come this summer.  The two that intrigue me this year is the OWA and Jefferson Rye.  The OWA will be younger than previous years so it will be interesting to see if we find something top shelf.  I've already tasted through the Jefferson Rye samples and there's some winners in the bunch so I confident we'll be picking at least one barrel of the Rye.

I'll try and post short updates as we progress.  Cheers.
Posted by Greg at 5:28 PM 5 comments: