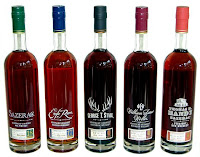 Sitting at work yesterday and all of a sudden things start rockin and rollin. Earthquake! Growing up in California I've lived through a number of them. Evacuation commenced and as we're all milling around outside waiting for the "all clear" my thoughts turn to home and all my bottles sitting on open shelves. I get a knot in my stomach thinking about a George T. Stagg or Pappy Van Winkle laying broken on the floor leaking it's contents all over the place. My plan was to work a little late but instead, I made a beeline home to check on things. Thankfully driving up I didn't see any missing bric

ks or cracks in either of my chimneys. Inside, everything looks normal as I do a quick inspection of multiple bunkers. Whew!

Evidently, there was a 4.2 aftershock last night about 8:00 which I didn't notice. I did notice however another aftershock this morning about 8:15. I just hope the 5.8 rumbler wasn't a pre-shock.

To celebrate surviving the great quake of 2011, I'm enjoying a 1988 Old Forester 86 proof with a Padilla Achilles cigar. The Old Forester is one of my favorite out of production bourbons. I say out of production because this particular bourbon came from DSP414 where current Old Forester come from DSP356. Very different flavor profiles. The 414 is rich, creamy, buttery and uber delicious. The Padilla Achilles is a good value cigar that I picked up from Cigars International for $2 a stick. Good cigar at a great value.

I just hope Hurricane Irene passes well to the East.