The blog is Bourbon Dork and I love bourbon.  Truth is, I love whiskey and the diversity of profiles whiskey brings to the palate.  For anyone that's been a long reader of this blog, I would not have guessed back in August of 2009 that I would be buying world whiskies at the rate that I'm currently purchasing.  From 18 years old to about 2006 I pretty much consumed Wild Turkey where I kept a bottle in the pantry and for the most part drank through a bottle or two throughout the year.  Then in 2006 I was hit with the knowledge that there were old out of production bourbons sitting on the shelves to be scooped up with those in the know.

From there, my whiskey appetite turned to higher end brands like Pappy Van Winkle, Buffalo Trace Antique Collection, Parkers Heritage, etc.  Then in 2009 I got in with some like minded enthusiasts and we went for the gusto and began purchasing whole barrels (93 to be exact) of bourbon and rye for our collective bunkers.  Had I reached whiskey nirvana?  Nope. 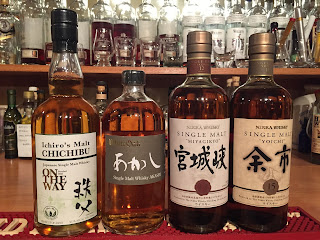 As my palate matured so did my search for new and different whiskey.  Scotch was the first to enter in as an outsider to my bunker intruding in on all the brown liquor made in 'murica.  Irish was next, then Indian and finally Japanese.

The Japanese make some darn fine whiskey and my first bottle was the Yamazaki 18 year.  It was a birthday present that my wife picked up for me way back when it was $129 on the shelf.  I quickly added the Yamazaki 12 year; a very good gateway whiskey for those interested in jumping into this style.  Besides really liking this new discovery in Japanese whiskey I had a problem.  This was a new thing to the U.S. market and there really weren't a lot of labels to be found.  At least not in my area.  I managed to secure two bottles of Hakushu 12 year from a buddy who lives in TX.  My big score was two bottles of Karuizawa 13 year cask from K&L Wines a couple years back.  Through a trade I managed to get the older sibling; Karuizawa 31 year old. 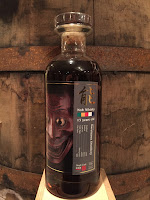 I enjoy immensely these new profiles but was now on the hunt for additional new and exciting Japanese expressions.  Over the last six months I've been on a tear picking up what I can in order to stock the bunker with a supply to last me for years to come.

Summer of this year Nikka dropped a bombshell and announced it was discontinuing two of their age stated expressions.  They simply ran out of older stock due to a sharp rise in demand world over.  Shelf space that was once occupied by Hibiki 12 year now sits vacant with a shelf tag saying "out of stock.  A recent discussion with a manager of a very large whiskey bar said his distributor cannot get them Hibiki 12.

Seeing the wave of discontinued labels or a retraction of distribution, I did what any good lover of whiskey would do.  Buy, buy buy.  So, as I mentioned over the last number of months I've been on the hunt and purchasing when found good Japanese expressions that are now history or run the risk of going that direction.  Recent acquisitions include:

I have other Japanese expressions that I picked up in the last year or two that include Karuizawa 14 and 16 year, Kirin 18 year and a Mars Kagoshima 25 year.

For those that love a good whiskey and have not experienced a good Japanese single malt or blend, I encourage you to grab a bottle and give it a go.  To me, the Japanese make great whiskey and I'm glad to add their whiskey to an ever more diverse bunker.