Yah yah...I know...this is bourbon dork and here I am getting ready to talk about Japanese whisky.  My interest in other whiskies has definitely expanded outside American selections but I think that's a good thing.

This doesn't mean I won't talk any less about bourbon or rye but the blog will have to share space with other great selections.

Back in 2011 I picked up my first two Japanese whiskies; Yamazaki 12 and 18 year.  The 12 year is a very solid pour but the 18 year is quite stellar.  Both of these were easily found back then but now, forget about it.  In two short years Japanese whisky has really taken off and I know this because my fellow bourbon enthusiasts are all over Japanese whisky and it's getting very difficult to find any Japanese selection on the shelves. 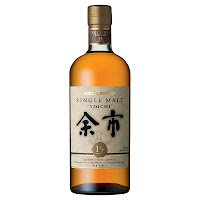 This year while attending Julio's Go Whiskey Weekend, I picked up two more selections; Hibiki 12 year and Nikka Yoichi 15 year.  A couple months ago K&L Wines offered two different Karuizawa expression.  Interesting note that the Karuizawa has never been sold in the U.S. and K&L is the first to get two single barrels with one at 12 years old and the other about 30 years old.  I picked up two of the 12 year old and expect them to arrive sometime in August.  A couple weeks back a buddy of mine from Texas picked up two Suntory Hakashu 12 year for me.

In future posts, I'll do an Exam-o-Dram on each of these expressions.  Just as a heads up, I'm digging every one of these.
Posted by Greg at 10:32 PM 5 comments:

Buffalo Trace announced about a week ago that they are experiencing shortages on some of their bourbon, specifically, bourbon that feeds their house brand and Eagle Rare.

The fact that BT's parent company, Sazerac, issued a press release is noteworthy.  During past shortages, news of something like this came by word of mouth through enthusiasts with inside knowledge or via distributors advising retail clients of shortages.

This happened around spring of 2008 when Weller Special Reserve went missing for a period of time.  I couldn't find any locally but managed to happen upon a country store in rural Maryland that had two bottles sitting on the shelf for $15 each so of course I grabbed them.  During this same timeframe, Binny's Beverage Depot purchased two barrels of Weller 12 (which was actually a 14 year) and in my conversation with their manager he indicated that BT told him he would not be able to purchase any more barrels for a while due to some shortages.  Now, it could have been true or a PR stunt to increase awareness and demand.  In any case, the shortage was noted in many markets for multiple labels.

Going forward what should we expect to see?  I don't know as my crystal ball isn't working but historically, BT has dropped labels in efforts to consolidate or support more popular labels.  I don't see BT dropping their house brand but Eagle Rare....who knows. 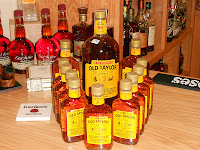 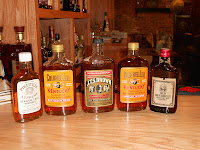 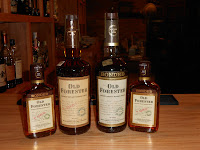 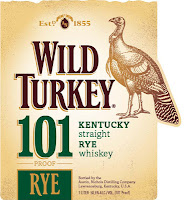 It's not a big secret that I love Wild Turkey.....especially the older stuff from the 80's.  The current NAS Turkey 101 bourbon is a decent pour and in discussions with Jimmy Russell a couple years ago and through other sources, the bourbon in the current release is a blend of six to eight years old.  Not too bad for a bourbon that runs around $20 a 750ml.

The current Rare Breed I believe is around 108 proof and during my recent trip to KY, the rumor mill was spinning about a proof increase for this label to 114.  Rare Breed is another WT offering that's a pretty good pour so that news was encouraging although at the time, unconfirmed.

Back last year Wild Turkey Rye 101 proof did a disappearing act from retail shelves and there was speculation that the rye was going to be discontinued.  Chuck Cowdrey dispelled that myth stating that supplies were low across the rye spectrum and Wild Turkey was no exception.

As bourbon enthusiasts, there are some that like to troll the online site for the Government entity known as the Alcohol and Tobacco Tax and Trade Bureau.  In essence, any label a distillery wants to use must pass through the doors and receive approval from the TTB.

Recent submission by Campari (Wild Turkey Parent Company) were for both Wild Turkey Rye and a new proof of Rare Breed at 112.8.  Good news on both and the proof increase on the Rare Breed is official.

So, keep your eyes peeled, especially for the Turkey Rye as rye in general is in limited supply.
Posted by Greg at 5:55 PM 7 comments:

.....as Clint Eastwood would say and I guess the same could be said of Robert Parker from Wine Advocate.  K&L recently posted a blog where Mr. Parker reviewed bourbons....his first foray into this relm.  Well, I didn't think the reviews were particularly well done and while I was going to post a more lengthy respone to Parkers bourbon tasting prowess....I decided to leave that to Tim over at Scotch & Ice Cream.