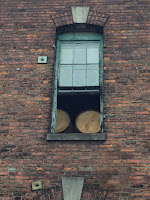 Thursday had us on the road early in order to get to Buffalo Trace by 9:00 a.m.  We arrived and I let the gift shop folks know that we were there to see the BT Barrel Program Manager, Beau.  About 10 minutes later Beau shows up and apologizes stating that he mistakenly put us down for the following day and needed some time to set up since they were not prepared.  No big deal so we checked out the expansion construction going on in the gift shop to kill time.  About 9:40 we headed to Warehouse H where BT conducts the barrel picks.  Going in my concern was the quality of the barrels since they had to rush to pull samples and cut them down to 107pf.

On entering, there were 12 samples lined up ready for our fine tuned palates.  As we made our way through the samples it was clear, at least to me, that picking our top four was going to be a chore because once again, Beau's team pulled some mighty fine bourbon.  Unfortunately, I misplaced my tasting notes so I can't provide any details except to say they were excellent samples.  In all we picked four barrels.  We don't have bottling data yet as we are waiting on yield counts. 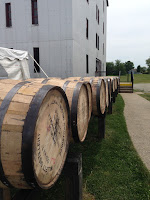 After the tasting there wasn't any standing around as we had to make our way back to Bardstown for a visit to Willett (KBD).  Drew Kulsveen was waiting on us and we arrived right about on time.  He took us on the tour which many of us had been on before but he walked us through the upgrade and repairs they will be doing this year to include breaking down some of the distillation components to fix some nasty leaks.  The end of the tour found us in one of the Rick houses and Drew pulled two samples of his own distillate for us to try; a 2 year old wheat bourbon and a 3 year old rye.  I think without exception, the group was quite impressed with both samples.  The wheat bourbon had no hint of new make or aggressive youthfulness.  It was rich, creamy, sweet and very delicious. The 3 year rye was also outstanding and I told Drew if he were to bottling it today, I would buy it.  Both samples were very impressive which hopefully translates to exceptional whiskey when bottled. 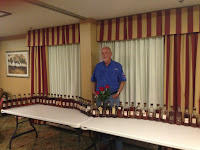 That evening Jim Rutledge joined us for dinner and spent the evening hanging out with the group.  We had planned well ahead of the trip to pull together as many Four Roses Single Barrel bottles as we've picked as a group or just single barrel expressions that members have picked up over the years.  These bottles as you can see in the picture were lined up on the table for Jim to try at his leisure. We ended up with 50 bottles with about half of those single barrels we had picked over the last 5 years.  Jim was quite surprised by the lineup and enjoyed sipping on those and visiting with the group until close to midnight. It was an exhausting but great kick off to the first day of picking.