Breaking news: Harlen Wheatley, the Buffalo Trace Master Distiller let the cat out of the bag while attending an event in Dallas recently. According to him, it's been decided that Old Weller Antique (OWA) is being retired.

This was just reported by a fellow member of the board who attended the event. Harlan gave the reason as limited supply of stock. If you remember back in 2009, BT made the decision to drop the age statement and I commented about it here. I said privately among my fellow enthusiasts that the next possible turn of events was the label being retired. I hate being almost right.....almost because it hasn't happened yet.

Early this year I took possession of a number of private barrel picks of OWA and I'm getting ready to head to KY to taste through a couple more barrels. I just hope this recent turn of events doesn't put the purchase at risk.

This is sad news folks. I hope the news is wrong but based on the public outing by Harlan, it appears to be true.....we'll see.
Posted by Greg at 10:34 PM 7 comments:

Sorry for the delay folks in posting. It's been a crazy busy two weeks. I have a couple things to post, my very late Go Whiskey Weekend tasting on Sunday Feb 26th, another blind Irish tasting result as well as a project I've been working on; Bunker Relocation. As my picture roll shows, all my bunkered bottles sit on shevles in my storage room in the basement. I'm building out a dry bar and shevling to handle the hoard. I'll post commentary and pics in the very near future.
Posted by Greg at 7:50 AM 1 comment:

This selection is the second in the Irish tasting line-up. As I mentioned in the Greenore posting, most of my whiskey buddies primarily drink bourbon. The difference between bourbon and Irish can be quite stark with Irish being a softer and gentler whisky. This profile type isn't always well received among bourbon drinkers.

My love of bourbon and subsequent dabbling in other world whiskies comes from the pleasure of trying new things. Delicate or bold, for the most part, it's fun trying new expressions. For others though, bourbons big bold flavor profile is the go to, not some sissy, triple distilled Irish whisky.

The Greenore didn't fair so well only garnering a mediocre rating but the Bushmills did fare somewhat better. The description from the Bushmills website states "Bushmills' premier blend, with a significantly greater proportion of malt to grain whiskey than the white label. Selected Spanish Oloroso sherry-seasoned oak casks mature the malt, before it is blended with d 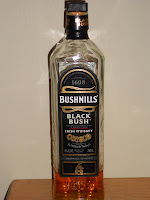 The Bushmills is 80pf, is a smooth drinker and has decent flavor but in the end is still a low proof blend. From a flavor profile it's a little more exciting than the Greenore with touches of bittersweet chocolate, sherry and plum. At a higher proof, I'm sure this would drink with a little more charisma. Black Bush is an all around decent whisky and I would have no problem ordering from a bar. If at home, I would reach for other selections.

As I mentioned, the tasting panel scored this one slightly better than sample #1 with an overall average score of 82:

"Honey flavored, a hint of butterscotch.very uncomplicated but pleasant."

"Not very complex but enjoyable all the same."

"It's a good whiskey, but I feel that if it were higher proof it would be potentially great."

As you can see from the scores and comments, it's a pleasant whisky, enjoyable but not overly complex, and bottled at a higher proof would be a bonus. This bottle comes in 750ml size and runs low to mid $30's and is widely available. For me, this one was good but in the end, not one I would probably pick up as there are other expressions I like better, even if they do cost more.
Posted by Greg at 8:41 PM 10 comments: