Well, I finally dumped my Very Old Barton that had been sitting in a 5 liter barrel since November of 2009. On July 30th I poured what was left in the barrel into two 750ml bottles. If you look back at the original post, I pumped a little over 4.5L into that barrel and managed to pull out 1.5L. Now, some of the loss was sampling over those 8 months, sharing with family and friends as it matured and then lost distillate in the barrel itself during the hot summer. The remaining loss was in fact due to evaporation. Even so, that's a whole lot of loss over 8 months.

To say the end product changed over the original bourbon would be an understatement. Because of the size of the barrel, there was a lot of contact with new charred oak and that really had a heavy influence on the bourbon early on. In fact, I thought maybe it was ruined because it was so overly woody but alas, my patience and warmer weather balanced out the oak (which is still there but not overly dominant), reduced sweetness, added a smokiness and char influence and because of the evaporation, the proof definitely increased.

The color is moderately dark; almost like weak coffee. Nosing the bourbon produces some wood notes, slight smoke and has a finish that is reminiscent of a bold barrel proof bourbon taken down in proof that lingers with a slight tannic oak aftertaste. I'm pleased with the outcome and have enjoyed a number of pours from this bottle. I've got family and friends asking for samples but I'm having to beat them off with a stick since what's left over is pretty minimal.

The day after I emptied the barrel, I refilled it with Evan Williams Bottled in Bond which is a pretty decent bourbon all by itself.

The diminution of George T. Stagg


This was one of the first days in a long while that it wasn't near 100 degrees with high humidity which made it all the more perfect for a scheduled bourbon tasting. In the past I've hosted tastings that focus on mashbill, bonded and distillery but today's theme was something a little different.
On the table, a 2007 George T. Stagg topping out at a hefty 144.8 proof which I cut to 4 distinct proofs of 114, 107, 101 and 121. As many of you know, cutting bourbon can change the profile of a bourbon by taming the proof and bringing out subtle flavor components, etc with the goal of today's tasting to do just that. Taking a big heavy weight like GTS down from barrel strength is not hard and a dilution calculator can be found here at www.Straightbourbon.com whi 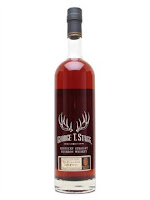 ch is what I used to determine the water to bourbon ratio. One of the attendee's was late so there were four of us tasting the GTS. Taking the bourbon down to a number of proofs provided insight into how the profile changes with diminished proof. The problem with GTS is that it's still very drinkable at its bottled proof but that's not something I would recommend you do on a regular basis. The high alcohol content can have adverse affects. In any case, the bourbon really opened up and at around 114 which are what two of us picked for being the most well rounded. One picked the 121 and one picked the 107. As you can see, our opinions varied which is what makes an exercise like this interesting and fun to do.
After the tasting we feasted on a eye of round roast that I slow cooked in my Cookshack smoker for around 3 hrs coming out at a rare 125 degrees. The roast was thinly sliced and folded onto Kaiser Rolls with provolone cheese and a horseradish and sour cream spread. On the side, some homemade Austrian sauerkraut which is slow simmered in a chicken stock for about 3 hours. After this bout of gluttony, we settled down to an impromptu tasting of a couple various bourbons. First, we lined up 4 different Four Roses Single Barrel selections which I list as follows (The recipe details can be found here):
Four Roses 100th Anniversary (OBSV recipe)
Bourbon Society Four Roses Single Barrel (OBSK recipe)
Ledgers Four Roses Single Barrel (OESK recipe)
Private bottling from attending member (OBSK recipe)
The consensus was that the 100th anniversary was mediocre which is surprising because at 17 years old, I would expect something with a little more depth and character to it. To me and others, it fell flat. The Bourbon Society bottle was good to very good. This was done back in July 2007 and was picked from 12 different barrels. The Ledgers Four Roses was just recently bottled and was very good; this is one of two barrels that were bottled. The last one was a bottling done by a friend so I'm not going to give out the personal details but I will say this one was big and robust with plenty of spice and heat and came in at 123 proof. This bourbon, while fun to drink is one that I would take down with water or an ice cube. He generously gave each of us a bottle of his Four Roses which is very much appreciated.
Last, and just for grins and giggles, we tasted two batches of Jefferson's Presidential 17 year which is a Stitzel Weller bourbon distilled in 1991. These were bottled 94 proof which is why we reduced the proof of the Pappy Van Winkle 15 year to 94 proof so we could do a comparison. The reason we did this is that there was some discussion about when given a choice, would you choose the Pappy or the Jefferson's? I had stated on a bourbon forum that I would take the Pappy's which a number of board members agreed with. Well, I have to admit that with the Pappy reduced to 94 proof, it was hard to choose between them at the same proof. Head to head, I would take the Jefferson's batch 4 over batch 1 as it had a little more body and mouthfeel, plus the finish was more in line with classic Stitzel Weller. Still, if having to choose between bottlings, I would still take the Pappy 15 over the Jefferson's 17; but that's just me.