For a number of years my Christmas wish list included bourbon and without fail, my loving bride would come through with the items I wanted most which usually meant that years release of the Buffalo Trace Antique Collection. For the first time, BTAC didn’t make it on my list this year. The only thing I’ve asked for is the newest release of Parkers Heritage Collection (4th Ed). This year’s release is the first from Heaven Hill produced wheat bourbon since they took over the Bernheim Distillery in 1999. Malt Advocate rated it a 93 and other enthusiasts have been quite positive in their feedback. I’ve had it and it is quite good. I initially did not intend on getting a bottle because of its steep retail price of $80 but through the kindness of a friend who acquired multiple bottles at a steep discount, I hope to unwrap a single bottle on Christmas morning. I’m not sad or second guessing my decision to not ask for any BTAC for a couple reasons. First, I have a deep bunker of previous releases, many of which I have yet to try. The last full set of BTAC that I had open was from 2006; I know, pretty sad. I’ve opened singles along the way but never a full set all at once since 2006. Second, I’ve recently hooked up with other enthusiasts who are hard core and like to travel to Bourbon Mecca (Kentucky!) and pick out their own barrels. I’m fortunate to be included in this exercise and as a result, I’ve acquired bottles that I find to be stellar bourbon from start to finish. For a little over a year, I’ve participated in some fashion the tasting or selection of 5 barrels and in my very biased opinion, they are top shelf all the way. The lure of single barrel offerings like Stagg or William LaRue always get my attention but I’ve come to the conclusion that I can’t have them all and have settled into a state of contentment with what I have.

So, for Christmas this year I anticipate getting a single bottle of Parkers, a coffee roaster, a Belgian waffle maker and a stocking full of assorted candy. I’m thankful that I don’t need soap on a rope, socks or underoos.

Turkey day is almost upon us and with that are thoughts of Turkey (or Turducken if you're a bit conflicted), mashed 'tater's, stuffin, cranberry sauce, baked oysters (not sure how this is festive), buttered rolls, green beans, pumpkin pie, apple pie and later in the day, leftovers. What's missing is what spirit, brew or wine will go with those various food delicacies? I'm sure we'll have wine but that's not my area of interest so I'll focus on beer and whiskey. My thoughts are to start the opening salvo with a beer before dinner and that will be Bell's Best Brown Ale. I picked this pre-dinner tipple because it's a very flavorful brown ale which will get the taste buds going and it's also a low ABV. For dinner a Widmer Brothers Prickly Pear Braggot and a La Chouffe Belgian Blond Ale. I selected these as I wanted something that would provide a little tartness or flavors of spice, fruit, honey and mild hop. While wine is all well and good, sometimes, I prefer a beer that lifts the palate while indulging and I think the Braggot and Belgian blond will do the trick. I think those that like wine will probably prefer the Braggot while others may go with the spicy ale of the Belgian. After we all awake from the tryptophan and carb slumber, we'll indulge in an upside down apple pie and a pumpkin pie paired with a couple stout selections that feature a flavor profile of coffee, dark chocolate and malt. While I haven't firmed up the selection, it will probably be either a Chimay Premier or Founders Dirty Bastard Scottish Ale. For those that want to indulge in an after dinner whiskey, I'll be offering a various whiskey's from the open bottle collection (north of 55 bottles) so it's up to those that indulge to select what they want. For me, probably a 144 proof 17 year wheat bourbon……..neat……then sleep.

A friend recently turned me onto Founders Breakfast Stout, a wonderful dark ale full of roasted coffee and chocolate, malt and a slight bitter finish. Awesome! This beer comes from Founders Brewery out of Grand Rapids MI and I have to say, they are doing most things right. Last night I attended a beer and food pairing at a local restaurant and they featured Founders selections with a 5 course meal. It was superbly done. On arrival, they gave each of us a Dry Hopped Pale Ale to start with that had a grapefruit and moderate hop profile. For dinner, the first course was a seafood salad with mint blood orange vinaigrette paired with a Harvest Ale which I found to be similar to the Pale Ale but more assertive; lots of grapefruit on entry and more hop. Next up a Tomato and smoke Gouda soup with Berkshire Ham and Wisconsin Gruyere on a toasted marble rye and this was paired with Red Rye P.A. Now, I'll tell you that my beer preference tends to run toward Belgian style dark ales, low in hop and carbonation so this Rye

P.A. was on the opposite end of the beer spectrum for me. The color was a noticeable red/amber hue and the flavor surprised me. While it was a hoppy beer, it was well balanced with a fruity quality that I actually enjoyed. I'm not sure I would sit and drink the Rye P.A. on a regular basis but paired with the soup and sandwich, it was quite nice. Third course consisted of a tenderized pork tenderloin (Pork Involtino) stuffed with cheese and spinach with oven baked sweet potato fries. This was paired with two selections; Dirty Bastard and Backwoods Bastard. The Dirty Bastard is a Scottish ale and reminded me of the Breakfast Stout but less coffee and less chocolate. It was very good……but when I tried the Backwoods Bastard, I quickly forgot about ole' Dirty Bastard. The Backwoods is Dirty aged in used Heaven Hill bourbon barrels that are stored underground in a defunct Gypsum mine for approximately 7 months. This one blew me away. The nose was reminiscent of an Almond Joy candy bar; caramel, coconut and mocha with a malty mouthfeel and a slight bitter finish. Superb all the way and needless to say, my glass was empty pretty quick. The fourth cours 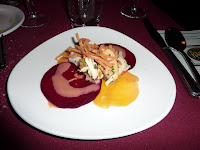 e was a Curmudgeon Beef Bourguignon with an Asiago Palenta paired with Old Curmudgeon. This beer is brewed with Molasses and barrel aged. It was good but at this point, I was starting to feel the effects of 6 beers and we still had two to go. Last up, dessert which was a warm chocolate bread pudding with mocha sauce paired with the Breakfast Stout. I won't put into words how to describe this beer, I'll let Founders do it for me "The coffee lover's consummate beer. Brewed with an abundance of flaked oats, bitter and imported chocolates, and Sumatra and Kona coffee, this stout has an intense fresh roasted java nose topped with a frothy, cinnamon-colored head that goes forever." 'Nuf said. As a parting "gift", they gave us some Cerise which is a tart cherry ale. I could have done without this one and left it behind, quite satisfied with the previous selections. If you're not familiar with Founders, get familiar. They're making some very creative and delicious brews that fully satisfy the most astute palate.
Posted by Greg at 10:39 PM 6 comments: