As I mentioned, I'm hosting a vertical tasting with 12 enthusiasts participating. We've completed the first 4 years; 1988 through 1991. So far, there hasn't been a standout bourbon in the lot but I'm hopeful something will pop up as worthy of discussion among the group. I've found this tasting to be interesting for one simple reason. Two of the years we've tasted through received high ratings from industry reviewers. Our rating system used is as follows:

Rating and overall impressions: The collective rating for this year was 81.4 which is average. This bourbon didn't impress the group with some stating is was thin, hot on the finish and uninspiring. Yah, I agree.

Rating and overall impressions: The collective rating for this year was 79.75, fairing worse than 1988. The group indicated the nose being light almost to the point of no aroma at all. One really had to breath in deep to discern anything on this one. The group also indicated this particular year had a cereal or grainy quality to it making this one just fair.

Rating and overall impressions: The collective rating for this year was 80.6. For the first three years, we're within less than a point from lowest to highest rating. The tasting notes had positive things to say about the entry profile containing caramel, floral and orange notes, mint and brown sugar. I thought this was better than the two previous years but the finish was a little drying to me. Here's the kicker, Spirit Journal dubbed this 1990 bourbon "Whiskey Of The Year". Go figure.

Rating and overall impressions: The collective rating for this year was 82.4, the best so far but still just average based on the rating system. Interesting the tasting notes from the group overwhelmingly included notes of citrus. Other qualities included oak, brown sugar and corn. For me, this one was the best second best of the lot as I like the '90 slightly better. From the Heaven Hill Bourbon Heritage Center website "Like a fine wine, each bottle of Evan Williams Single Barrel Vintage Bourbon contains a vintage date telling the exact day it was put in an oak barrel to age. Every year, a new vintage of Evan Williams Single Barrel Vintage is released to critical acclaim. The 1990 Vintage was the first Bourbon to be awarded "Whiskey of the Year" by The Spirit Journal. The 1991 Vintage was awarded "Domestic Whiskey of the Year" by The Malt Advocate and "Spirit of the Year" by Wine & Spirits."

So far nothing has jumped out as worthy to bunker but we still have 8 years to go so let's hope subsequent years are more inviting.

I'm in the middle of hosting a Vertical Tasting Event (VTE) using 12 years of Evan Williams Single Barrels starting with 1988 and going through 1999. These being single barrels, there's going to be variances from bottle to bottle for the same years. The more interesting aspect of this tasting is to determine the differences of the various mashbills throughout this timeframe. Let me explain. 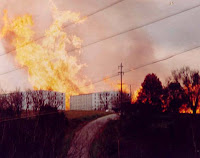 On November 7, 1996, Heaven Hill experienced a devastating fire that destroyed the production plant and several warehouses containing 90,000 gallons of bourbon. In order to continue product releases, Heaven Hill was able to contract with Brown Forman and Jim Beam to distill bourbon to Heaven Hills standards. So, drinking through these 12 samples give's the tasters a variety of masbhills under the same label. Why is this important? Well, the recipe isn't just the grain and yeast, it's also all the equipment involved in the distillation process from the mash tuns to the column stills. As such, the flavor profile will be very different because multiple distilleries were involved in the distillation of this label.

All the Evan Williams Single Barrels are approximately 10 years old and 86.6 proof. When lining up these bottles side by side, the color variances in some bottles were quite remarkable; going from very light to moderately dark. The results aren't in yet as we've only tasted through 1988 and 1989. As we progress, I'll provide updates. Finally, I haven't heard of anyone doing a 12 year vertical tasting of the EWSB so this might be a first, but if you have, let me know, I'd be interested in hearing the results.

A Day of Dusty Hunting

Three weeks ago, responding to a classified ad in the Washington Post I visited a nice retired gentlemen who was selling his vintage Wild Turkey decanters. His collection consisted of about 30 or so decanters from the 1970's through the 1980's. It was a very nice collection but unfortunately most of the decanters were empty. Not because he enjoyed that wonderful bourbon over the years but because he didn't. You see, those older decanters contained cork stoppers and they were notorious for evaporation of the whiskey. Of the decanters he initially showed me, only one contained whiskey. Upon further discussion, the nice gentlemen indicated he had a couple more decanters in his storage. These decanters, having been stored in their original boxes for at least 20 years were in perfect condition and all contained bourbon. I brought home 5 decanters that contains some of the best bourbon ever produced; Wild Turkey 8 year 101.

Last weekend I hooked up with a couple of friends and instead of hunting in Washington D.C., we trekked a little further north to Baltimore. We hit approximately 15 or 20 stores and only scored in about 5 of them (typical). In those 5 stores we were able to secure about 35 bottles of various bourbon and rye whiskey. The bottles originated from various distilleries that are no longer in operation and represent some outstanding whiskey.

One of my personal favorites, and one I've mentioned here on this blog, is Old Fitzgerald Bottled in Bond (BIB). We only found three 500ml bottles of the BIB which was disappointing but to make up for that, we found 2 bottles of Old Fitzgerald Prime 80 proof from 1983 and the more rare Old Fitzgerald 90 proof from 1981. In my years of hunting I've found plenty of Old Grand Dad in the 80 or 86 proof versions but never the Bottled in Bond. Now I know why, they were all in Maryland. I found 2 "handles" which are the larger 1.75L bottles that dated from 1986 and 1987 respectively. In 1987 Jim Beam purchased the Old Grand Dad label but prior to that, it was distilled by National Distillers who did a darn fine job with that whiskey. Too bad, in my opinion, quality suffered under Jim Beam in subsequent years. Brown Foreman has been in the same family for decades and they produce Ol

d Forester. I can say that the Old Forester of today is nothing like the bourbon of yesteryear. I found a 1981 Old Forester Bottled in Bond which to me rivals the Old Fitzgerald of the same timeframe in quality and taste. The last two labels found were new to me; Colonel Lee Bottled in Bond and Pikesville Supreme Rye Whiskey. The Pikesville is a straight rye whiskey and these particular bottles were from 1991. I opened one of the bottles when returning home and it's an excellent whiskey even though only 80 proof. The Colonel Lee is from Barton Distillery which was purchased by Buffalo Trace a year or so ago. We tried the Col. Lee also and found it to be quite viscous and very flavorful. I'm just sorry I found only one bottle.

For those of you who dusty hunt, there's still some great stuff out there just waiting to be found. The bourbons listed above represent some of the best.