They're pretty much all doing it now; releasing premium bourbons and charging a premium price. I touched on this in my BTAC post back in October and for the last number of years, we've seen an increase in super or premium bourbon offerings. Let me create a list here and see if I can capture a good sampling:

Heaven Hill - Parkers Heritage Collection first released in 2007 with a batch of three, the first being the best.

Jim Beam – Bookers Bourbon which is considered the first premium release way back in 1992 according to the Beam website.

Brown Foreman – They haven't really jumped onto the premium bandwagon. They did release a Repeal bourbon a couple years back but that came in a 375ml gift package. BF also does their annual Birthday Bourbon release and while not that expensive, is limited and could be considered premium.

Kentucky Bourbon Distillers – Drew and his crew release some premium bourbons under the Willett, Vintage, Noahs Mill and Rowans Creek labels. They have some good bourbon that come from a variety of distilleries.

Wild Turkey – For a number of years now, Wild Turkey offered Kentucky Spirit which could be viewed as a premium as it's a single barrel at 101 proof but beyond that, Wild Turkey released Tribute a limited release of about 5,500 bottles, American Spirit and American Tradition.

Makers Mark – they've completely ignored the premium market instead sticking with their standard product. Just recently they announced a release of a new 94 proof variation that's getting some interest but I wouldn't consider this release in the premium category

Old Rip Van Winkle – this line of bourbon resides with Buffalo Trace but is managed by Julian Van Winkle. I do consider their 20 and 23 year old bourbons to be premium but in age and price only. I like the 20 year but find the 23 year to be overly astringent and woody. They also just released a 23 year old bourbon under the Old Rip Van Winkle label which comes in a decanter and gift box.

I think this gives us a pretty good idea of the premium bourbons out on the open market. There are a couple of advantages that premium bourbons offer over the standard shelf selections namely age and proof. Possibly a secondary benefit would be greater attention to storage as in the case of the Old Rip Van Winkle 23 year which was stored in the lowest part of the rick house.

As a general rule, I like higher proof bourbons; not because I'm a manly man (well maybe I am) but because it gives me control over the drinking proof. Purchasing an 80 proof bourbon locks me into one proof. Purchasing a George T. Stagg allows me to vary the proof to my drinking satisfaction. The age is another important factor as extra age provides greater depth and a longer co-mingling of the various flavor elements of the bourbon. Please keep in mind that older (age) isn't always better as I found with the Pappy Van Winkle 23 year and the Weller 19 year; both astringent and woody. I also mentioned storage location which plays an important role in the overall aging process. Any barrel high up in the rick house will age faster being subject to greater extremes of heat and cold while a barrel stored at the lowest point is less susceptible to these extremes thus aging more gracefully. A couple of my favorite premium releases was the first Parkers Heritage release in 2007 batch 1 which was about 11 years old barrel strength and William LaRue Weller from 2006 at 15 years barrel strength. These two are great examples of a super premium bourbon that's worth the extra money they command.

I for one like the fact that distilleries offer the premium bourbons as it adds another dimension to my overall bourbon experience. For most folks, these premium bourbons won't be everyday drinkers and will be set aside for those times when you want the complexity and contemplation that goes with a bourbon such as this. I know some of you think it's silly to lay down a three or four Jacksons on a bourbon but sometimes it's nice to have a premium in the wings.

I'm in a dry spell right now because of a wonderful Spring cold/flu. Coughing, sneezing, stuffiness, sleeplessness and overall achiness. I've tried Nyquil but now I'm thinking George T. Stagg. Something to break through all the crud keeping me from enjoying a nice dram of something. Truth is, I have no desire to drink as I really can't taste anything anyway which is why I was thinking Stagg as that may power through to the taste buds.

So, when you're down and out, do you cease drinking or do you rebel against your body and keep it flowing in spite of the illness?

My VOB re-barrel is still aging and I wanted to break into it this last weekend as we've had a warm spell for early Spring, but alas, the barrel goes untapped. Maybe by the end of the week . 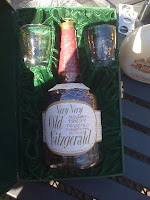 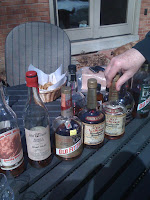