I've lived in Virginia for nearly 32 years and for that duration, the Commonwealth has been an ABC state.  Back when I moved here in 1985 my bourbon of choice was Wild Turkey 8 year 101 or Kentucky Spirit.  It took nearly 20 years to come around and realize there's a whole world of interesting whiskey's beyond what Wild Turkey offered.

Once that happened, my interest in acquiring different bottles was hampered by the fact that Virginia simply didn't put much effort in offering any variety to the extent that open market states carried a wide variety of spirits.  Thankfully, Maryland (not Montgomery County, a controlled jurisdiction) and D.C. were near by to help with my booze shopping.

On a fairly regular basis I travel to North Carolina which is also a controlled state.  While visiting family back about 5 year ago, I visited a local ABC near Lexington NC and was actually quite appalled at the anemic selection thinking at the time they were significantly worse than Virginia.

One of my early trips to NC I conducted a whiskey tasting for a group of local enthusiasts with two of the participants members of the NC ABC board.  One of the bourbons I featured was a Four Roses Single Barrel; one that shockingly they had not seen, at least not in the western part of the state.  Fast forward 1 year and I'm conducting the tasting once again (2017 was our 5th year going down) and the same two ABC board members are happy to inform me that western NC now carried Four Roses Single Barrel along with the Small Batch (I should get a kick back....seriously).  In my discussion with the two board members I encouraged them to broaden their selections.

In no way do I take any credit for what shows up on the shelves of North Carolina ABC stores.....maybe some minuscule influence but that would be it.  Last fall I was again visiting family in NC and was pleased to see ABC stores carrying a much broader selection that just a couple years previously.  I think this is in large part due to the huge popularity of American whiskey evidenced by the two rows of various rye and bourbon labels on the shelf of the ABC store.

Virginia has certainly changed their posture when it comes to whiskey and now feature a more diverse portfolio of whiskies, and not just bourbon and rye but a few more Scotch, Irish and Japanese as well.  I'm more inclined today to drop into my local ABC and see what's on the shelf.

Of course as the state controlled monopolies increase their shelf selections, so too does the open market retailers in non-controlled states.  In my opinion, the ABC's will always be playing catch up to the rest of the country as their bureaucracy is a natural impediment to the freer movement of inventory elsewhere.  As an example, I've never seen Independent Bottlers of Scotch, etc release in ABC states.  Maybe they have but in my area I have to shop in non-controlled jurisdictions to find releases from Cadenhead, Caskers, Douglas Laing or Old Malt Cask.  What ABC's have done is single barrel selections form Jim Beam, Four Roses or Knappogue.

I do hope ABC states one day relinquish control and allow the open market retailers to do what they do best.  Sell a broad and diverse selection of great spirits.
Posted by Greg at 11:41 AM 2 comments: 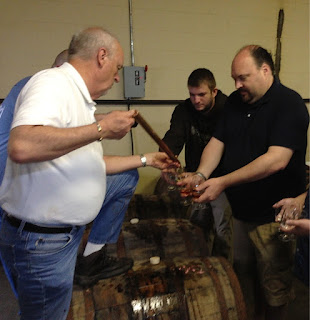