I'll start right off and say this wasn't my idea. The idea originated from a Master Distiller of a micro-distillery who mentioned it to a friend of mine. Fast forward a number of weeks and I'm sitting on friends back patio commenting on how delicious the Manhattan is. He proceeds to show me his barrel which is full of Manhattan deliciousness.

Ok, so not to assume that everyone knows what a Manhattan is, this is a typical classic recipe:

Couple Maraschino cherries with a little of the cherry juice to taste.

I've blogged about my re-barrel projects and it so happens the barrel was sitting empty. I put the barrel in the kitchen sink and proceeded to fill it with water and of course it leaked like a rusty tuna boat. Water was pouring from the seams. Did I panic you say? Nope. The barrel was dry having sit empty for a while so I expected it to leak. I kept refilling the barrel to keep it full and after a couple of hours, the leaking slowed and then stopped altogether. I let it sit overnight full of water to make sure the barrel was well saturated.

For my Manhattan concoction (and that's what it was) I proceed to pull together the following:

These all went into the barrel. I then added approximately 600ml of Sweet Vermouth, a tablespoon of Blood Orange Bitters and Maraschino cherry liquor to taste (approx. 1oz). The stopper went back into the barrel and I proceeded to gently roll the barrel to get the concoction mixed up.

How did it taste? Well, I'm sippin a glass right now as I type and I must say it turned out pretty darn tasty. I think the Maraschino liquor and Blood Orange Bitters gives it a unique taste from the classic Manhattan recipe. The barrel contains about 3L of mix so I'll be enjoying this for a while and also enjoy the benefit of a little barrel aging as I go along.

Fathers Day – Beer and Whiskey….what else? 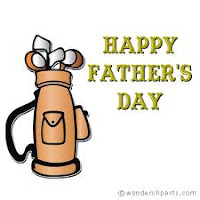 I consider myself exceptionally blessed to have many family members that live close by and as such it makes family events such as Fathers Day a fulfilling event. My dad turned 72 this year but he's slowing down although he will never admit that as he's the first to jump into any project to show he still has "true grit". Yesterday was a day of relaxation and enjoying each other's company. I enjoyed the day with my oldest son, my father, brother and two brother in-laws. There was lots of dead animal flesh cooking away on two grills as well as beer galore. I brought along some Allagash Black, Port City Porter and Optimal Wit as well as a mix of whiskies that included; Bushmills 21 year, Midleton Very Rare Irish, Old Weller Antique (a single barrel done back in 2009), Van Winkle Family Reserve Rye, 1982 Old Fitzgerald Bottled in Bond, Knob Creek Single Barrel and a recently purchased 18 year Willett which is a wheat bourbon that I cut down to 107 pf. My wife asked me what I wanted for Father's Day and I told her sandals. Tomorrow I celebrate 25 years of marriage to my lovely bride and we'll be heading out on a cruise to celebrate and I wanted some new sandals. God bless her, she didn't get me sandals, instead I received a 32" HDTV for my man cave. 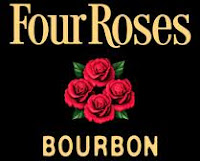 I made sure I didn't stay up too late on Wednesday as we had an early start to Four Roses on Thursday morning. We were due at Cox Creek, the warehousing facility at 9:00 a.m. The drive to Cox Creek was short from the hotel and we arrived shortly before 9:00. The guard waved us on through and we proceeded to the bottling house. I'll tell you that Four Roses does a magnificent job putting together tastings. They are very attentive to detail and the presentation is very nice. Due to the size of our group, we had to double up and share tasting stations which wasn't a problem; unless you're next to the guy with a fever blister.

In attendance from Four Roses was the warehouse manager, brand ambassador and master distiller Jim Rutledge. Jim did an awesome job hosting the tasting and sampled while he talked to the folks as we worked our way through 9 samples. Three of each recipe was brought out; OBSV, OBSQ and OESK. The three recipes break down as follows:

Tasting through these samples at 9:00 in the morning is an interesting venture. To be honest, probably the best time to taste would be early morning as the palate is at its best, unadulterated condition (I'm not suggesting this become a normal routine). We took our time and after about an hour began to collect the tasting notes and scores in order to rank the 9 barrels. 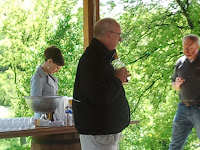 I think I've mentioned before that Four Roses is not a favorite of mine although a small group of us selected a barrel last year that turned out to be one of my favorites. The standard Four Roses Single Barrel offering is the OBSV recipe and surprisingly, this ended up the being the group pick at 70% of the tasters preferring barrel #3, OBSV recipe. This barrel yielded 126 bottles and came out of the barrel at 116.7 proof. The one thing I do like about Four Roses is the low slung warehouses which allows the whiskey to age at a more graceful pace which many times yields a bourbon at a lower proof.

After we finished up the tasting, we all piled back into our respective rides for the 50 mile trip to the Distillery in Lawrenceburg. It should have been an uneventful ride with the exception of one wiseacre feeling the need to offer the obligatory mooning on the Blue Grass Parkway….nuff said about that.

We arrived at Four Roses and gathered at the Gazebo which overlooks the Distillery and gift shop. The fine folks at Four Roses set up a nice boxed lunch as well as a well stocked bar of various Four Roses products. While the group munched and sipped away, Jim Rutledge provided an oral history of Four Roses and took questions as needed. After lunch, we broke up and the group headed out on a distillery tour….except for a couple of us that cornered Jim for additional conversation. We asked some follow up questions which Jim was more than happy to answer.

All in all, it was a great time and my hat is off to Jim and the fine folks at Four Roses for their graciousness and generosity in spending a whole day with a group of folks who are nothing more than enthusiasts of all things bourbon.