So you don't think I tripped on garden hose and cracked my head on the pavement....I'm alive and well. There are certain times where the business and busyness of life overtakes other activities like drinking, watching a little TV, hitting a bucket of balls at the driving range or updating a blog. My day job has me fully engaged during the day and I have no time for online goofing off during a lunch break that I haven't taken in say two weeks. As many of you may (or may not know) I also own a Franchise that my good brother does a fine job managing while I'm off doing IT work at my paying job. My Franchise work consists of doing all the financial and administrative duties after hours as well as working on getting funding for our next location which I'm knee deep in as I type. On top of that, I also sit on the IT Advisory Committee for the Franchisor. Those duties sometimes take me out of town as it did this last weekend. I spent a glorious weekend walking through McCormick Place in Chicago for the National Restaurant Association annual convention. I was there doing some fact finding and am in the process of writing a report on my findings. So, I say all that to let you fine folks (and dorks) know that I'm not shirking my duties as lead dork but time is not on my side right now. I wanted to write this short posting just to let you know that I do have some stuff in the works and to say thanks for being patient and giving me the opportunity to entertain you about my bourbon musings. I'll have some updates this weekend. Cheers.

About two weeks ago I spent four glorious days in Kentucky doing what a good bourbon enthusiast would do. Drink bourbon. A quick summary of what transpired

Wednesday – Driving 10 hours from Northern Virginia to Bardstown Kentucky. Dumb jokes, cigars and frequent bathrooms stops. Besides the 4 of us were 28 other bourbon dorks from all 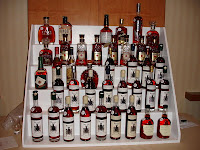 over the U.S. joining in on the fun with one participant coming all the way from Sweden; now there's dedication for you.

The plan for the evening was a one off tasting of single barrel whiskeys. We had a total of 44 bottles and the criterion for the bottle being included in the tasting was you had to have had a role in the selection process. Amazing that out of 32 participants, we ended up with 44 bottles of pretty darn tasty whiskey (both Rye and Bourbon were represented). I personally had a hand in the selection of 6 out of the 44 which means I bypassed my own stuff and concentrated on selections that up to that evening, I had only heard about. I'll admit that I sampled maybe a third of the bottles as there was just too much to sit and enjoy in one evening, although there were a few brave souls who attempted it. It was a great evening and I was able to meet some folks that I had never met in person yet chatted with many times in various bourbon forums. My two favorite of the evening was a 21 year old Rye and a 12 year Van Winkle Lot B that was Stitzel Weller bourbon.

Next up: Four Roses tasting and luncheon.

Here we are with the final four years of the EWSB tasting. For me, this kind of confirmed how I already felt about this particular bourbon; it's an average bourbon. I find this somewhat interesting since this is a 10 year old bourbon, I would think the variations from year to year would be more extreme but the reality is, among the dozen or so tasters, this bourbon broke to the middle as an average bourbon.

Rating and overall impressions: The collective rating for this year was 83.5% which is on the high side of average. One taster stated "The EWSB profile, coupled with the low 86 proof seem to be a very safe, unambitious platform."

"A good bourbon that runs in the middle of the pack"

"Nice average bourbon with no flaws"

"So for this year, looks to be same same"

Rating and overall impressions: The bell curve on this one was pretty much non-existent. This year EWSB broke high to low with 40% rating is average or above average by an even split and then 60% rating it fair to pass on this one. Comments included:

"Bitter but still thin and watery"

Rating and overall impressions: Again, this year lacked a curve whatsoever. In fact, two tasters rated this excellent all the way down to two more rating is as a pass. Overall rating for this year was 81.3%, barely making it into average territory.

"Flawed and I question whether this is drinkable. Worst of the tasting…."

"This is nice stuff. I'd buy a handle"

"I think I'm starting to repeat myself….drinkable but nothing exceptional"

Rating and overall impressions: This final year rated a 82%....I know, shocking! This last couple of years I believe were Jim Beam bourbon although it could have been Brown Forman. Some comments…..

"…this last of the sampling is my favorite. It is a very pleasant pour…"

"Evan Williams has gotten better over the years"

"….nothing there really to enjoy"

So there you have it. The overall score for all 12 years was an astounding 81.7%. 12 years of single barrel bourbons that in the end break to just average overall. To be honest, I really thought there would be some stars in this line up but guess it wasn't to be. I'll say it again; taste is subjective so if you like this particular bourbon, it's a great value at about $24 a 750ml. For the most part it's simple, unassuming and consistent. Not a resounding thumbs up for the EWSB brand. There were a number of years that rated very high with industry reviewers but here among us mere pedestrians, we gave 66% of the years an average rating. Now that this tasting is done, let's drink something better than average.