I have the white label and green label....now all I need is the red label.  In case you didn't know it, Heaven Hill has sold a red label 12 year 101pf expression in the overseas market showing up in places like Japan and Australia.  Sadly, not here for us local folks.  I do some crazy bourbon purchasing but on occasion (last Saturday being one of them), I pick up the very drinkable and value based Evan Williams Bottled in Bond (White Label).  To think I could get the same whiskey at 12 years old is very enticing. 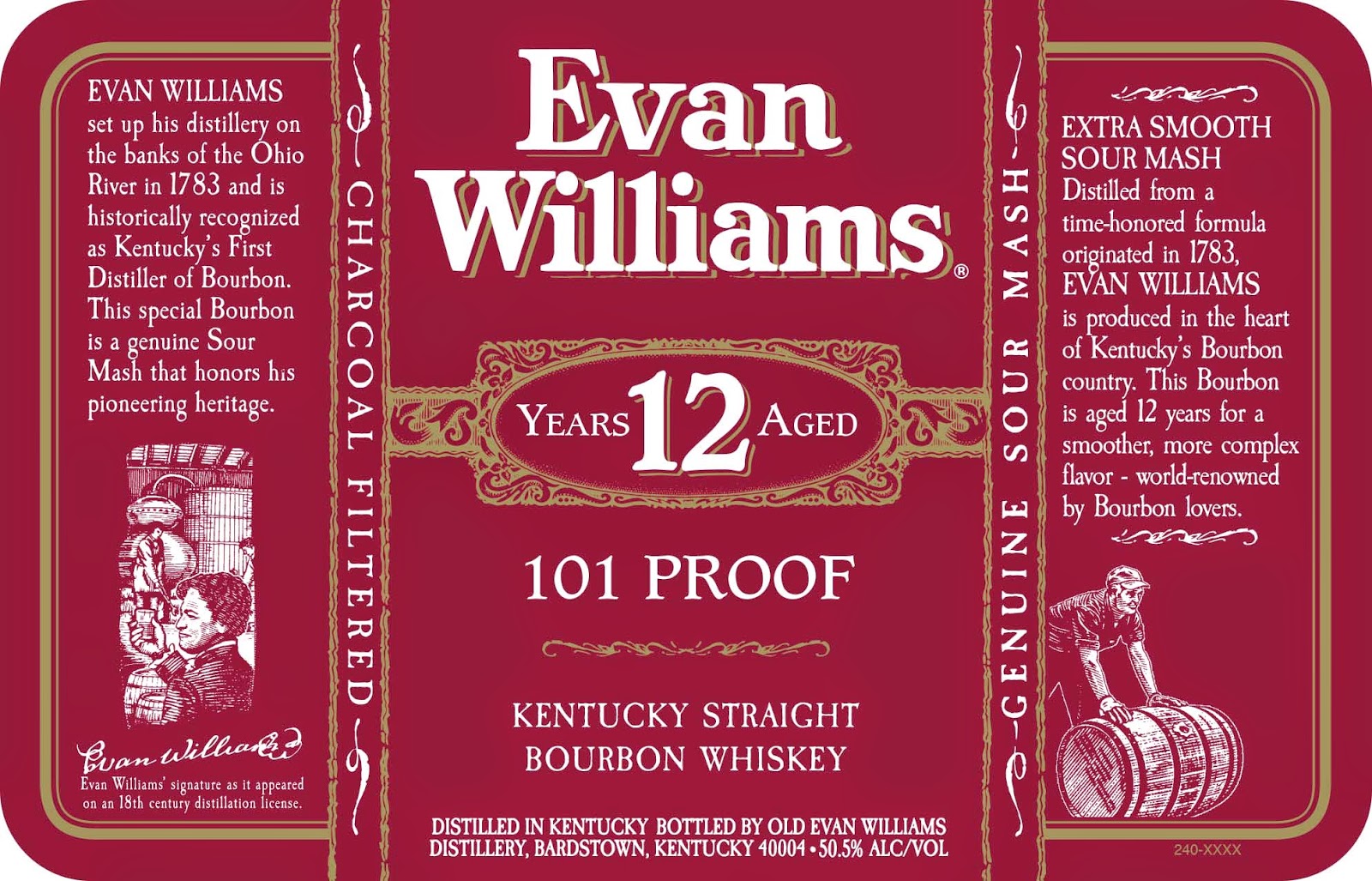 Five days ago TTB approved the new red label for Heaven Hills 12 year old expression.  Will this label be available here in the U.S. market?  I don't know but I can only hope.  With labels and age statements rotating out of circulation over the last number of years, it's encouraging to think that a distillery just might put a decent proofed, aged stated bourbon on the market.....but what market is yet to be seen.

UPDATE 1/24/15: Rumor has it that this will be released here in the U.S. and will be (at least for the time being) a distillery only bottling.  I've heard two timelines; this month or within the next few months.  I have friends keeping an eye out so at the very least, I'll pick up some bottles in May while in KY picking barrels.

A History of the American Spirit - Bourbon

Earlier this year I was contacted by Harper-Collins and asked if I would like to read a new book about Bourbon.  Of course I'm interested is my response so within a few days I receive Dane Huckelbridge's A History of the American Spirit - Bourbon.  Unfortunately my work schedule was quite full which pulled me away from reading as well as this blog which you can attest to by the lack of posts over the summer. 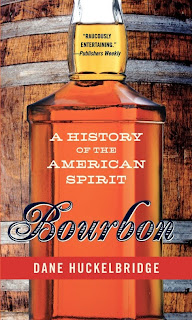 I managed to squeeze in times that I read a chapter or partial chapter but I did finally manage to finish the book.  There are a number of books I've read over the last couple of years that includes Whiskey - An American Pictorial History by Oscar Getz; But Always Fine Bourbon by Sally Van Winkle Campbell; and Bourbon Straight by Charles Cowdery.  Each of these books is well written for the most part and provides a nice history and facts about America's beloved spirit and those that make it.

Dane's book was packed full of facts that for the average reader may seem meaningless but for the enthusiast, it was whiskey catnip.  I quickly determined as I read the first couple of chapters that Dane spent a good amount of time researching this topic.  His ability to weave in American history into the history of American distilling was at times fascinating. The book at times read almost like fiction taking historical facts and not only bringing them to life but written in a way that makes you want to turn the page to find out what happens next (which was very difficult for me since time devoted to reading was so haphazard).

As an example, Chapter 2 "A Tale of Two Georges" piqued my interest early on as the story of Boston's Molasses disaster describes how 2.3 million gallons of sweet, sticky Molasses swept the streets of Boston.  How did I not know this?  What a fascinating story of a virtually unknown fact in America's distilling history.

In recent weeks as I sat and read the final portion of this witty and entertaining book, it was not uncommon to pair up with a bourbon or rye to make the read that much more enjoyable.  If you love American's whiskey and its history, I highly recommend Dane's book, A History of the American Spirit - Bourbon, it's a spirited read (pun intended).
Posted by Greg at 2:23 PM 2 comments:

There are those that have been chasing and collecting far longer than I.  It wasn't until 2005/06 time-frame that my interest really piqued when it came to American Whiskey.  Since that time I've been on a acquisition rampage that eventually extended into other whiskies.

I've been witness over time of bourbon becoming harder and harder to find.  Even back in 2007/8 you had to be on "the list" in order to ensure you received some sort of allocation, which truth be told, wasn't that hard.  Witness my allocation of multiple 2008 BTAC sets sitting on the dining room table.  Crazy to think how far we've come with bourbon and rye turning into a very hot commodity.

Back in early 2007 I called a liquor store that carried Pappy Van Winkle 15, as most any good liquor store did.  The manager asked how many bottles I wanted so I order 1/2 a case, or 6 bottles at $36 each.  In today's secondary market those bottles now run upwards of $650-$700 a whopping 1900% increase.  Gone are the days of bourbon providing quality over value when PVW15 was $36 a bottle, or George T. Stagg cost $45 a bottle.

The waiting lists, lotteries, parking in front of a liquor store to be first in line or in some cases, chasing the delivery trucks down the road asking if they have PVW on-board is crazy land but unfortunately that's reality if you want to get one of these uber hard to find whiskies.

I still chase whisk(e)y but for the most part, no Antique Collection, Pappy Van Winkle or Parkers Heritage.  I chase things that I truly want to drink over the long term.  I recently acquired two 1991 Wild Turkey Rare Breed which through multiple resources landed me the opportunity to pick those up.  I've been adding quite a bit of Scotch to the bunker that includes a recent find that is simply wonderful whisky; Balvenie Founders Reserve 10 year.  This whisky has been out of production for at least 4 or 5 years but I've been grabbing bottles to bunker since it's undervalued for the quality of the pour. 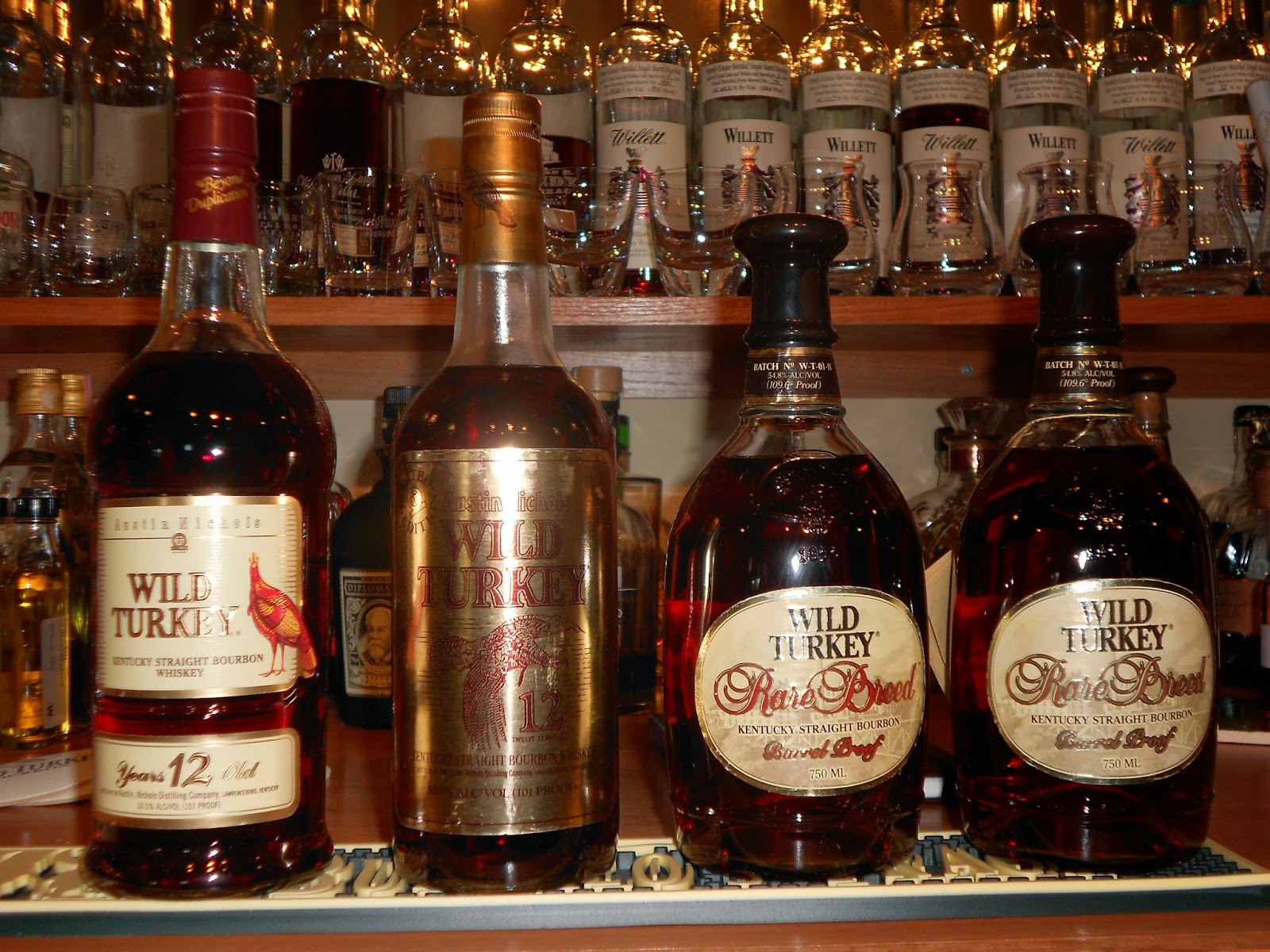 Hunting whisk(e)y has taken on a whole new definition that in most cases will cost you lots of cash and time.  Back in the day I would dusty hunt because older bottles were plentiful and cheap.  Those days are over for the most part but the reality is my tastes and interests have expanded well beyond out of production Old Fitzgerald or Old Forester.  I still like the thrill of the hunt but I'm much more selective and deliberate in my efforts to ensure I'm adding what I want and not bunker spamming.

I mentioned earlier in the post that you had to be on "the list".  I've been on lists for many years but for some reason, my name is now gone and I don't get the phone calls anymore.  That's ok, I think my bunker is stocked enough to provide solid enjoyment to my dying day.
Posted by Greg at 2:19 PM No comments:

I've been hammering away at adding quite a few world whisky selections to the bunker that primarily includes Scotch but I've also acquired some Japanese as well.  I've managed through friends and online to pick up some nice selections below market value.  I did pick up some additional bourbons as well; some dusties and some current. 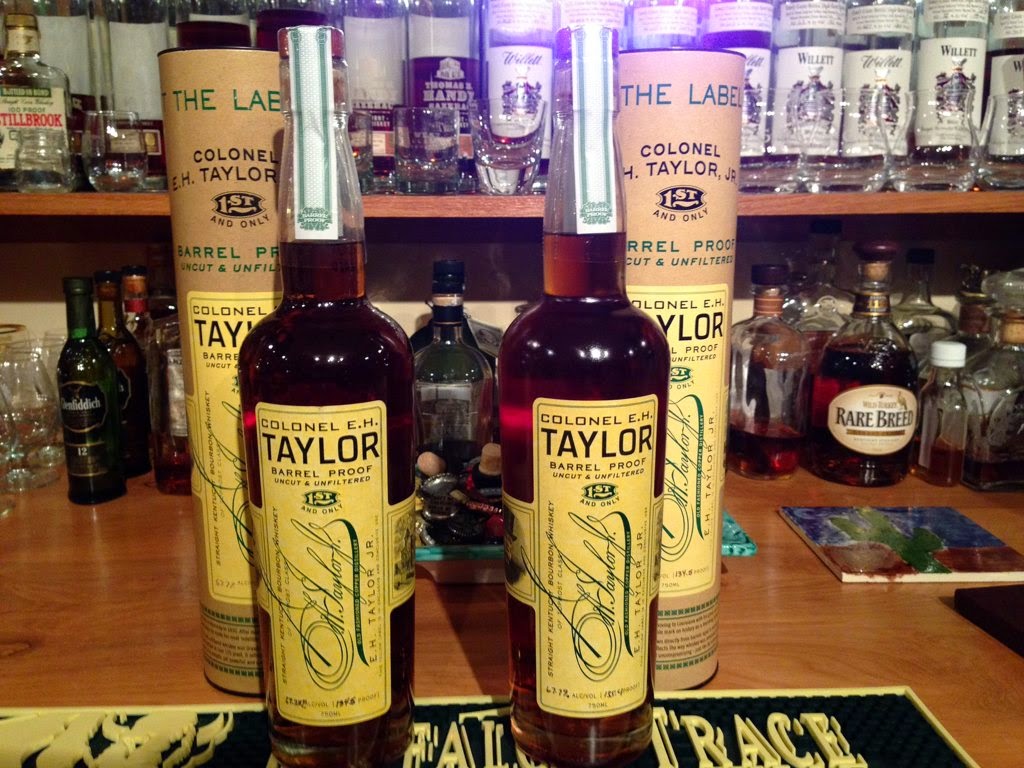 On the bourbon front, I picked up three Colonel E.H. Taylor Barrel Proof selections.  I've not been chasing these since they came to market but figured it was time to play catch up since some of my fellow enthusiasts seem to like the various offerings.  I picked up five bottles of Elijah Craig Barrel Proof to add what I already had in the bunker.  I really believe this bourbon is undervalued for a 12 year cask selection.  Next up I scored two original release Wild Turkey Rare Breed 1-91.  I have a 2-91 open and it's fantastic whiskey.  Too bad Wild Turkey isn't what it used to be.  I also picked up a Wild Turkey Cheesy Gold Foil, Wild Turkey 12 year split label and a Wild Turkey Legend.  I'm a fan of the older Wild Turkey so I'm very happy to have these in the bunker.  Last an Ancient Age 86 proof liter from 1981 made its way on the bunker shelf. 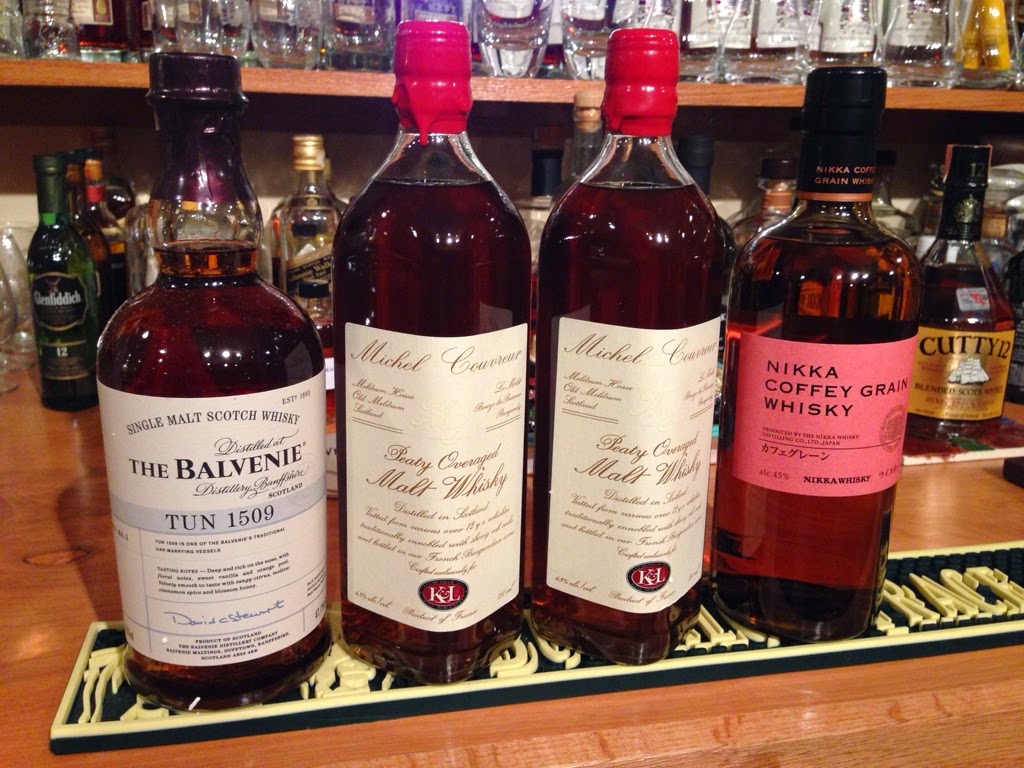 On the Japanese front I added a Memories of Karuizawa 16 year, HST Karuizawa 14 year and a Mars Kagoshima 25 year.  The Kagoshima Distillery stopped producing whisky way back in 1984 and  Karuizawa stopped production in 2000 after producing whiskey for nearly 50 years. I have two Karuizawa in the bunker, a 13 year and a 31 year.  The 13 year is probably one of the most complex and interesting whisky I've ever had.  Last, I added a Nikka Coffey Grain. 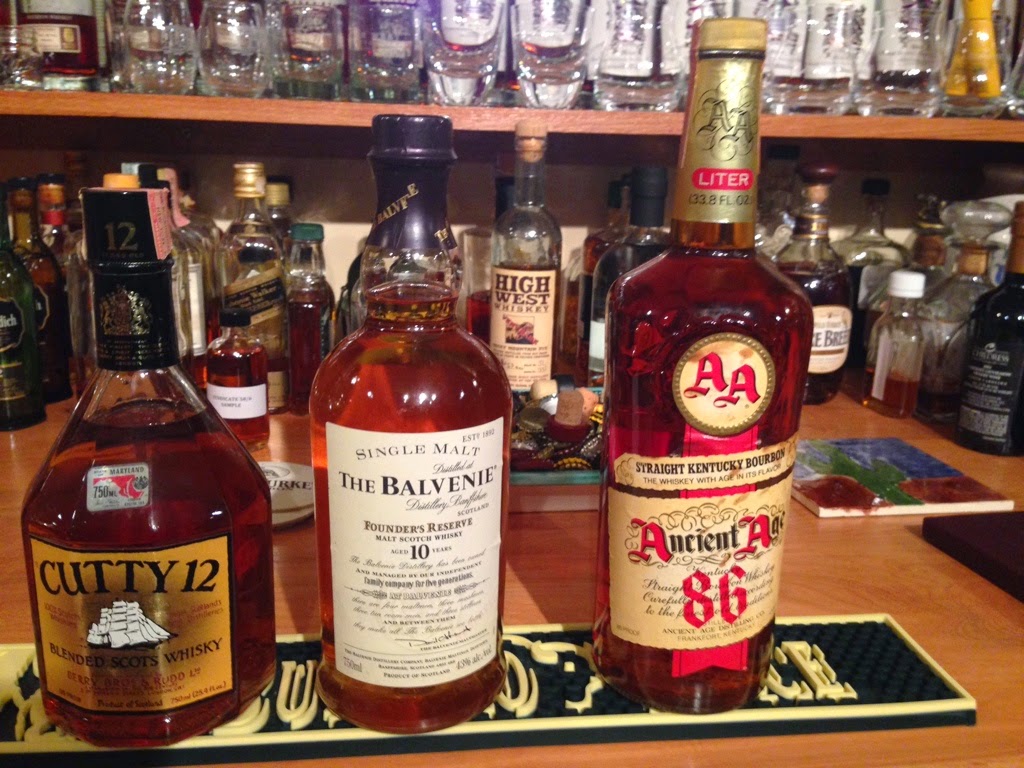 Scotch has been the biggest addition to the bunker in the last month.  Balvenie, located in Dufftown, pumps out some pretty good Scotch and I added three out of production Founders Reserve 10 year and two Tun 1401 Batch 9 along with the new Tun 1509 Batch 1.  Also added were Glenfarclas 21 year, two Ardbeg Ardbog for about $80 a piece; well below retail in 2013, an out of production Glenmorangie 15 year, and one I'd never heard of; a 20 year Authroisk that I pulled the trigger on based on some reviews.  From K&L I picked up a very interesting selection; Michel Couvreur Peaty Overaged Malt Whisky.  They've sold out but am glad to have nabbed two bottles as it's fantastic.  A dusty blended Scotch made it's way to the bunker; a late 70's Cutty 12.  This will be opened soon as I'm very curious about this one.

This year has also seen barrel selections come in from Smooth Ambler, Four Roses and Jim Beam.  I'll get to those later.

For now, I'm just trying to make room for all these new additions.
Posted by Greg at 10:59 PM 2 comments: