In the spirit of full disclosure, I'm very partial to Eagle Rare 101. The current iteration which comes in at 90 proof is nothing like the 101. When I first tried ER101 I smelled and tasted malted milk balls, which I love, therefore it was love at first taste. Eagle Rare has been parented by a couple of owners and as a result, the profile has gone through some changes. But for the most part, it's a very good bourbon and unfortunately was discontinued by Buffalo T

Eagle Rare entered the market in 1975 and was started as a counter to Wild Turkey and Heaven Hill did the same thing with the release of Fighting Cock. Eagle Rare was a Seagram's product who also owned the Four Roses Distillery. In 1989 the Sazerac Company (Buffalo Trace) purchased Eagle Rare and Benchmark Brands from Seagram's.

Eagle Rare 101 is one of those benchmark bourbons that rise above others of similar breed but I'll caveat that statement by saying that while the label stayed the same through acquisition, the mash bill did not. Seagram's, to my knowledge, used the now Four Roses distillery for their Eagle Rare brand, which was a high rye mash bill and more than likely consisted of a vatting of a couple of recipes. Four Roses does this today with their Small Batch release and Seagram's was known to do this when they were producing. After Buffalo Trace acquired the label, I believe they switched to a low rye recipe, thus the profile changed. To its credit, Eagle Rare was still a

very good whiskey even with the change in recipe so any bottle you can find whether from Seagram's Old Prentice Distillery or Buffalo Trace, this is a bottle you should try and find.

If you go into a liquor store and See Eagle Rare on the shelf, don't celebrate too fast because this is more than likely the current Single Barrel 90 proof version. The 101 was not a single barrel.

Now, to the overall experience of the Eagle Rare, I currently have a bottle that was distilled in 1972 and bottled in 1982. This came from a eagle decanter that was part of a four series release. The bourbon inside is quite good. I mentioned in 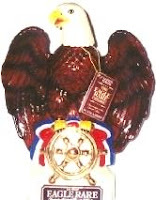 the first paragraph about picking up malted milk balls on the nose and palate. Well, that was a Buffalo Trace release of the Eagle Rare, not Seagram's which is what was in the decanter. This variant has a very nice nose with traces of candy shop, nuts and caramel. On the palate the proof does not dominate the experience but compliments the flavors, almost accentuating them. The taste validates what the nosing revealed; candied nuts, caramel and maybe a hint of citrus. The mouth feel was full and robust with a nice oily texture. The finish is medium to long dispersing the flavors until you're left with a slight tingle on the tongue.