“You can’t handle the proof!”

At least I think that was the line from A Few Good Men. Ok, it wasn't but let's talk about proof, and specifically, barrel proof. A barrel proof bourbon or rye whiskey is going to be whiskey that is bottled at proof from the barrel (e.g. not cut with water). That proof varies depending on a

ge and warehouse location. There's been speculation that Booker's Bourbon from Jim Beam was the first barrel proof bourbon to be released to market but that's debatable as Stitzel Weller put out their Original Barrel Proof Weller Special Reserve 10 year old bourbon which was 110 proof. Of course, 110 is low compared to what is found today with the limited release stuff like Parkers Heritage, Willet, George T. Stagg which can exceed 140 proof. There's also some evidence that there were barrel proof offerings in the early 20th century. Whoever was first really isn't important in the grand scheme of things, but what is important is that there are a number of barrel proof offerings that are really great pours.

Drinking barrel proof bourbon or whiskey may not be for the novice or adventurous. The novice probably won't have the developed palate to power through the alcohol to pick out the finer nuances of these power house drinks. The adventurous may want to slam back a barrel proof to impress friends but all it will do is most likely cause injury. Remember, 140 proof bourbon is 70% alcohol and must be sipped not gulped.

I have a number of barrel proof bourbons and whiskey's that are very good pours but I only drink these when I can take the time to sit, sip and enjoy; never rushing through a barrel proof drink. I once attended a luncheon with Fred Noe, the great grandson to Jim Beam and he commented that bourbon should be enjoyed any way you wish. I agree so if you need to cut your barrel proof with water or ice, go for it.

The list of barrel proof offerings is pretty limited as these bottles are typically limited or one off releases. Here's a list of a number of the barrel proof bou 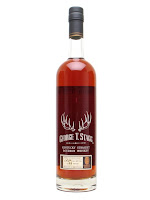 rbons and rye's that are on the market:

One of the things I like about barrel proof whiskey is it allows me to control the proof of my drink. I can drink the whiskey at barrel proof or begin cutting to any proof down to 80. Because the concentration of alcohol is so high, this can mask many of the overt and more subtle characteristics of the whiskey. Being able to pick out the barrel or grain characters could be difficult at full strength. If I find this is the case with a barrel proof whiskey, I begin to cut in very small increments until the full personality of the whiskey is realized. Sometimes this takes a couple of tries but experimenting with it is part of the challenge of enjoying a whiskey with this much power. Just this evening I sipped on a 2008 release of Thomas H. Handy, a straight rye whiskey. This whiskey came out of the barrel at 134.8 proof but in my opinion, does not need any cutting as it's enjoyable at full strength.

If you're into bourbon or rye whiskey, you should have at least one bottle of barrel strength in your collection as a way to fully round out your whiskey experience.