Here I am.....reviewing Ardbeg Dark Cove on a very warm July afternoon.  I'll admit I took a bit of a hiatus to enjoy some down time.  As I mentioned in my previous post I was shedding some overhead out of my life and took a break to just relax.  That being said, it's time to look at another whiskey that of course has been reviewed by others.

As I always do, full disclosure up front this sample was provided to me by the US marketing firm for Ardbeg so a thank you to them. 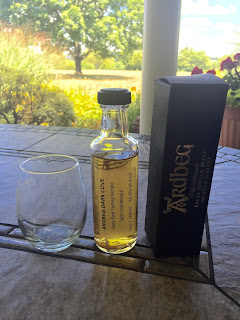 Heavily peated and smokey scotches are a relatively new profile for me but once I tuned in to this style, I had no problem adding various expressions to the bunker.  Back just four years ago I stated on this blog that I disliked most Islay whiskey's giving a hat tip to a Bruichladdich 15 2nd Ed. that I picked up on a cruise maybe 8-10 years ago.  Since 2012 my palate has gone through some transformation which resulted in a broadening of styles added to the bunker.

Dark Cove is Ardbeg's annual limited release and they billed this release "the darkest yet".  Viewing the whiskey it's pretty light in color on par many other whiskey releases.

On the nose I get a couple different aroma's that pique my interest.  The smoke and peat are right up front but there are a couple other things happening that are inviting.  There's definitely a summer fruit essence on the nose, maybe pear or apple.  One other thing that I can't put my finger on is a creamy quality....it smells syrupy if that makes sense.  The viscosity is above average producing decent legs around the glass.

The entry somewhat contradicts the nose producing a spicy and salty entry with a moderate sweetness in the background and the peat hangs on the tongue.  As the whiskey transitions to mid palate there's malt and mild chocolate coming through.   The finish is moderate with a dominance of malt and peat finishing off the experience.  As some minutes passed by the back of my palate has a noticeable campfire taste that's not entirely unpleasant.

Overall, this is a pretty decent whiskey.  This whiskey is for those that gravitate towards a peaty and smokey expression.  For my friends who tend to shy away from this style I would tell them to steer clear but for those that are peat heads, this should be in your wheelhouse.  For me, I like this for the most part but it would not be a "daily drinker".  This style of whiskey for me is more of a "in the mood" pour.  After receipt of this sample I did go out and grab two bottles of the Committee Release and it will be interesting to pair up this lower proof version to the higher proof CR.

This whiskey is non age stated and runs somewhere north of $100.