Back in March I posted about some tastings in preparation to our April pilgrimage to Kentucky.  We added a rye whiskey to our selections and we had anticipation of tasting and buying some good rye whiskey.

Back on June 5th, the first of our barrels picks showed up; Jefferson Rye 10 year. I was pretty excited to get this bottle as I don't have many ryes in the bunker so this was a nice addition. 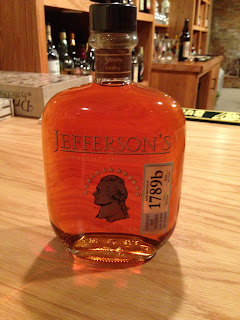 First, it's a little odd that the packaging for the Jeff Rye shows a silhouette of Jefferson, a great American icon...but in the bottle is good 'ole Canadian Rye.  Who cares.....what's it taste like?

First off, lots of flavor for a 94 proof whiskey.  Christmas spices, sweet rye, and maybe a touch of mint.  Nice mouthfeel....not overly coating but enough body to carry the finish quite nicely.  This rye is right in my wheelhouse; it's an easy drinker with lots of flavor.  Now I wish I had asked for a higher allocation cause the bottle I have open is about 2/3 gone with three remaining in the bunker.