For those that are interested in Scotch, hear ya go.  A couple of us local guys got together last Friday evening and decided to try a flight of various Glenmorangie (Glenn-Morrun-Jee) selections ranging from the standard 10 year shelf offering Original to the cask strength Astar.

I've mentioned before that my whiskey journey all started with Bourbon and that's still my mainstay drink.  But....world whiskies are getting my attention as I'm starting to find and try various selections.  Late 2010 I posted a blog series called Global Tippler where I sampled various whiskies from different countries, starting with an American Whiskey, Van Winkle Family Reserve 12 year.  Since that 'round the world trip, I've come across other great selections.  Last summer my wife and I cruised the Easter Caribbean and one of the stops I always look forward to is Philipsburg St. Maarten due to the fact they have a good selection of liquor stores where I can find stuff not sold in the U.S.  One bottle I picked up on that trip was a Glenmorangie Sonnalta PX.  I was really impressed with the whisky and added that label to my list of acquisitions. 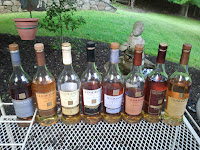 So, last Friday the group cobbled together a flight of 8 different selections of Glenmorangie pulled from our respective bunkers.  Here's what we sipped on over the course of the early evening:

Original: 10 year old 86 proof.  From the Glenmorangie website ".....maturing for ten long years in a range of ex-bourbon casks such as our famous slow-grown and air-dried 'designer casks' from Missouri, that our raw spirit develops a perfect balance between sweetness and complexity"

The Original was a pale golden color with orange zest on the nose with undertones of vanilla and floral.  The feedback from the group included "viscous, fruit, honey, citrus zest, sweet, transitions nicely, good finish, delicate and lighter profile"  Overall rating 85/100

Nectar D'Or: 12 year old 92 proof.  From the Glenmorangie website "...hand selected wine barriques from Sauternes: the most famous and ancient sweet wine growing region of France, that this whisky develops its rich, spicy and dessert-like flavours."


Quinta Ruban: 12 year old 92 proof.  From the Glenmorangie website "The darkest and most intense whisky in the extra-matured range, Glenmorangie Quinta Ruban has spent 10 years maturing in American white oak casks, before being transferred into specially selected ruby port pipes from the Quintas or wine estates of Portugal.  Extra maturation in these port pipes develops Glenmorangie Quinta Ruban into a voluptuous spirit with a complex balance of sweet and dry flavours and an intriguing contrast of smooth and crisp, cooling textures."

Another expression that hit home with the group.  I liked the winey character of this offering as the port finish really popped on the nose.  At entry the port was less dominant but there nonetheless.  Group feedback included "Big dark fruit notes, winey, cocoa, citrus, long finish"  Overall rating 88/100 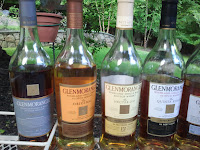 Sonnalta PX: NAS (No Age Statement) and 92 proof: From the Glenmorangie website "Having spent 10 long years maturing in American white oak casks this whisky is transferred into Spanish ex-Pedro Ximenez (PX) casks for its final two years of extra-maturation. Often described as the 'king of sherry casks' this rare wood was brought back from Jerez in Spain by our head of whisky creation Dr Bill Lumsden."

As I mentioned, this was my introduction to the Glenmorangie line and it really captured my attention the first time I tried it.  This expression to me exhibited a creamy entry with dark dried fruits like raisins and plums.  There's vanilla and cocoa that pop in about mid palate.  From the group "creamy, dry floral, elegant, sweet honey finish, complex, spice cake"  Overall rating 87/100.

Finealta:  NAS and 92 proof:  From the Glenmorangie website "Glenmorangie Finealta is a painstaking recreation of a recipe dating back to 1903. Matured in a combination of American white oak casks and Spanish Oloroso sherry casks this whisky is unusual for its light touch of peatiness - a reminder of a time when Glenmorangie dried its barley in a peat fired kiln.  Distillery archives show that at this time, Glenmorangie Highland Single Malt was being served at The Savoy in London. Making this whisky a window onto a grander age, where optimistic young souls toasted sweeping changes within Art, fashion, and technology. And where society demanded a drink of both depth and distinction.  Glenmorangie Finealta is the second release in our prestigious Private Edition range: carefully selected, limited edition whiskies chosen from the 'cabinet of curiosities' of Dr Bill Lumsden, head of our Whisky Creation Team."

This was the only expression in the lineup that exhibited traces of peat and just a hint of smoke.  I picked up light summer fruit in this sample with pear and melon making it's presence known.  A well rounded pour.  Group feedback included "very light peat / smoke, slight heat, white fruit, good mid palate, smoke comes on stronger in the finish"  Overall rating 85/100

Lasanta:  12 year old 92 proof: From the Glenmorangie website " Elegant but full bodied this whisky has spent ten years maturing in American white oak ex-bourbon casks before being extra-matured for a further two years in Oloroso Sherry casks from Jerez in Spain. Lasanta is Gaelic for warmth and passion, a reminder not just of the Spanish provenance of these Oloroso sherry butts, but also a reflection of this expressions lusciously soft texture and deep, enticingly sweet aroma." 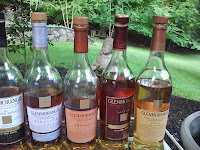 As someone who gravitates toward the sherried Scotch, this one was interesting to me.  We discussed this expression as compared to the The MaCallan 12 year which is about $35-$40 more than the Lasanta.  We agreed that this was as good if not better than The Macallan for a fraction of the price.  I thought this offering was very good exhibiting a profile of sweet dark fruit, baking spice, just a hint of citrus and vanilla.  Very warming and chewy.  Group comments were "chewy, sweet, rich, viscous, spice, concentrated flavor, caramel, long finish"  I personally rated this one a 90 with the overall group rating this an 88/100.

Artien:  NAS at 92 proof: From the Glenmorangie website "While crafting Glenmorangie Artein Dr. Bill Lumsden, Glenmorangie's Head of Distilling & Whisky Creation, was intrigued by the influence of stone in the natural ingredients of the whisky, especially considering the material's special significance to us.
This relationship begins with the Hilton of Cadboll Stone, an ancient monument that is the whisky's inspiration. But of no less importance is the layer upon layer of limestone that filters our Tarlogie Spring water, giving Artein its fruity aromas and layers of complexity. Or the rocky Tuscan hillsides which concentrate the flavours in vines that will, in turn, add complexity to the 'Super Tuscan' casks in which we extra mature our precious spirit."

This is another one that I really liked with an entry of fruit and cream.....in fact my comment to the group was "this is berries and cream".  This was probably the most complex of the selections as the Tuscan influence really added layers of flavors while experiencing this whisky.  Group comments "berries, peaches, plums, very creamy, honey suckle, concentrated flavors, huge finish."  Group rating 90/100


Astar: NAS at ~115 proof:  From the Glenmorangie website "Five thousand miles away on a secluded Missouri hillside, oak perfect for the maturation of this whisky reaches straight for the heavens. Here, in the relative shade of these north-facing slopes, we hand-select oak that has grown slowly enough to create a spongier and more porous wood. Perfect for welcoming the spirit and imparting the maximum amount of flavour.  The 'Astar', meaning journey in Gaelic, has certainly come a long way. But with its bright gold colour and smooth but spicy finish, we feel the journey has been more than worth it."

Since I tend to like barrel strength expressions, this last one I was looking forward to trying.  Unfortunately, it didn't ring my bell.  Surprisingly, the nose on this selection was the least compelling of the eight and the entry showed flavors of fruit and vanilla with heat taking over about mid palate.  The group comments included "big fruit, melons, sweet, heat on the back, nice finish."  Overall rating 84/100.  I personally put this at 80/100. 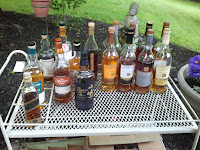 After the tasting, the group played guinea pig trying out a CAB (Cert Black Angus) Brisket that had been smoked in a Cookshack.  I say guinea pig because this was the first time our host had used CAB but I have to say, the final product was outstanding.  We enjoyed the BBQ with some other Scotch expressions that included cask strength 14 and 20 year Rosebank, 1965 Johnny Walker Black 12 year, MaCallan Cask, Balvenie 15 year Singularity '66, The Arran Malt Cask, Springbank 12 year Claret, Springbank Alchemist, Compass Box Great King Street and Yamazaki 18 year (not Scotch).


This was a great tasting that allowed us to experience different expressions we don't currently have in our respective bunkers.  I'll be hitting a Montgomery County ABC store on Tuesday to pick up a couple of the Glenmorangie expressions that I don't have.
Posted by Greg at 1:15 PM