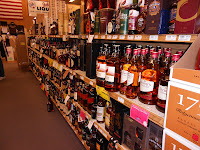 As I mentioned in a previous post, I attended Julio’s Go Whiskey Weekend about 6 weeks ago. There were three events with the finale on Sunday, February 26th listed as the “Grand Tasting”, and grand it was, oh and by the way….it was a free event.

For starters, Ryan Maloney, owner and proprietor of Julio’s Liquor (the J is not silent) has one of the nicest liquor stores I’ve seen. Living in Virginia (a controlled state) produces mediocre stores with mediocre liquor selections. The one slight variant here in my area is Total Wine does a decent job with their craft beer selections but there is room for improvement especially after perusing the beer aisle at Julio’s.

As a small business owner I have a number of marketing techniques I employ in order to generate foot traffic in my store and from this perspective, Ryan is spot on with not only this event, but the weekly events he holds at the store that covers whiskey, beer and wine when it comes to getting people in his store and strolling though the numerous aisle’s of drinking goodness. Wine? Not a problem, at least a third of the store is dedicated to that. Beer? Again, about a quarter of the store dedicated to that and spirits is another quarter. There’s also a fairly decent selection of tobacco ranging from canister pipe tobacco to cigars. So, getting folks in to taste whiskey is a great way to generate foot traffic, and ultimately purchases of whiskey during the tasting.

The size of Ju 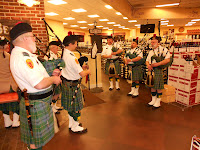 lio’s is impressive spanning over 10,000 square feet that includes wine and spirits tasting room as well as a basement space just renovated to handle larger events. The Grand Tasting on Sunday afternoon started at 1:00 and was to wind up at 4:00. We were warned there would be a line to get in and we weren’t disappointed. I decided to leave my coat in the car not wanting to hassle with carrying it around while trying to taste whiskey. We stood in line for approximately 20 minutes and at the front of the line was a Julio’s employee and a Westborough City Police Officer barking out for everyone to have their ID’s ready to display. Once at the front and displaying my valid ID, I was given a wrist band that had 10 removable tabs attached to it representing the number of samples I would be allowed to try.

Ryan provided a booklet to all participants of which I had received an advance copy. Because of that, I had taken the time the evening before to go through the list of 275 selections (yes, 275) and determine which ones I wanted to focus on.

Upon entering one was greeted with the sound of fighting cats…..er uh…..bagpipes. Each table was numbered which corresponded to a particular page in the booklet which listed what whiskies would be featured at each table. I spent some time just trolling around getting my bearings as the place was packed with other whiskey devotees.

As I began tasting through my various selections, I quickly realized why the wrist band had only 10 tabs to tear off…..tasting through that much whiskey obviously has its side effects. Some pours were meager while others were quite generous but in the end, I was able to taste through my selections while pacing myself over the course of 3.5 hours.

Some of the highlights of the tasting for me was the newly released Redbreast 12 year cask strength. It really blew me away how good it was. It’s a little pricy at the sale price of $65 but in my humble opinion, worth the cost. The Auchentoshan Three Wood was exceptional as was the new Bruichladdich “laddie” 10 year, Julio’s Rosebank 20 year and another Irish, Slieve Foy an 8 year a Cooley expression, and a new release from Amrut, Three Continents. These are but a couple examples of the tremendous lineup provided by the distilleries and resellers gathered at Julio’s.

A nice treat was to spend time talking with Al Young from Four Roses. He was kind enough to bring out the “under the table” soon to be released Limited Edition (at the time of the tasting) and I have to admit, it was pretty tasty. As some of you reading this may have noticed, most of my ramblings actually center around Scotch and Irish and very little about bour 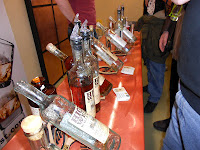 bon. I’ll admit this was done on purpose as I didn’t want to split the opportunity to taste some great whiskies between American and World selections. I’ve had plenty of bourbon over the years but the Scotch, Irish, Japanese and Indian whiskies have been taking up residence in my bunker at an increased pace of late so this was my one chance to taste through various expressions to get a sense of what else is out on the market.

One bourbon I will mention that I didn’t like was the Heaven Hill release of their Parkers Heritage Collection 27 year. This is one bourbon that I had on my list to try and I was disappointed which surprised me because I have liked those releases I’ve tried for the most part. To me, this release was way passed its prime.

This was a great weekend and I would encourage anybody in the Boston area that loves whiskey and has not attended the Julio’s events to make plans to do so. I enjoyed the weekend enough to make the trip again next year.