I was off the week of Christmas so decided what better time to get some guys together and enjoy some beer and home made tacos.

I decided the theme would be barrel aged (BA) beers.  I didn't want to focus on a singular profile (e.g. barrel aged stout) so did a little research and put together, what I think, was a pretty diverse list of BA brews.  Prior to the tasting I decided to whip up some home made taco's using a recipe found in Issue #67 of Beer Advocate. 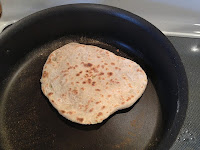 First, I made the the tortilla's which consisted of roasted green chili's, garlic and pale ale along with the flour base.  Instead of make the salsa from scratch, I bought some chunky salsa, strained much of the tomato base out and replaced with a Dog Fish Head Chicory Stout and let that sit overnight in the fridge.  All I can say is it turned out quite tasty.  I used 80% lean beef for the filling and some good aged cheddar cheese.  For the first time making this recipe, it turned out quite well...my guests wouldn't shut up about it.

After lunch we got down to tasting beer.  Here's the lineup: 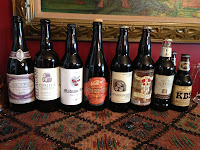 The Rye on Rye was a great start and as we worked our way through the brews, we really didn't find any that were stinkers.  I think the least favored was Smoking Wood.  For some, the smoke was too pronounced and dominated the profile.  The other near miss was the Madame Rose.  This is a Belgian style brown ale fermented with wild yeast and aged with cherries in wine barrels.  This reminded me of a tart ale with some sourness up front, big cherry profile and wine influence hanging around in the background.  To me, this was a very interesting beer and one I would enjoy again while some of the others said they would pass.  The three top picks were Rye on Rye, Bourbon Barrel Porter and of course, KBS. 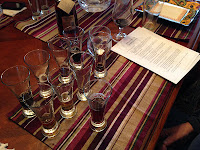 After tasting through the beer, we retired to the bunker bar and enjoyed a few bourbon libations.  Not a bad way to end the year.
Posted by Greg at 8:27 PM