A day at A. Smith Bowman Distillery 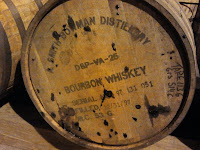 This past Saturday I traveled to Fredericksburg, VA with about a dozen other folks to meet up with Truman Cox, the new Master Distiller at A. Smith Bowman Distillery. The day started off with snow, and plenty of it. I've lived here in the Northern VA area for 26 years and don't ever remember snow in October and that's because maybe it hasn't. The last snowfall in October was 1979. I'm not a lover of snow so clearing my vehicle of about 2 inches of snow wasn't a good start. Thankfully the weather didn't temper the anticipation of the distillery visit as well as the planned barrel tasting.

We arrived shortly before 11:00 a.m. and were met outside by Truman. I'm not sure what a typical Master Distiller is supposed to look like but Truman reminded me more of my brother in law ready to sit down with a beer and watch the Sunday game or maybe grab his bow and spend an afternoon sitting in a tree stand. Truman was affable and polite at first but shortly he realized that our group were a bunch of wiseacres and quickly adjusted his posture to dishing it out which kept us laughing throughout the afternoon.

Sazerac purchased A. Smith Bowman late in 2003. At the time and up until about two months ago the Master Distiller was Joe Dangler who worked for Bowman for about 32 years. Back in 1927 Abram Bowman moved to Virginia and purchased about 4,000 acres in the area now known as Reston and started Sunset Hills Farm establishing a dairy and eventually added cattle where the beef and dairy were sold to the local community as well as the W 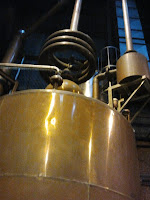 hite House. After prohibition Bowman began distilling around 1935 and produced Virginia Gentleman. Reston, VA was the first planned community in the U.S. and as such zoning laws were rather strict so while the reasons for moving the operation to Fredericksburg in 1988 may be multiple, Truman indicated one of the reasons for the move was due to increasing real estate prices which my own speculation would include an increase in personal property taxes.

Sazerac is investing some serious capital into the distillery which interestingly enough, the land is still owed by the Bowman family. Upgrades and renovations are currently underway as the distillery buildings smell of fresh paint and fresh coats of sealer on being applied to the floors in some of the buildings. The bottling operation for the Bowman value bourbons has been moved out of the facility and is now operated out of the Barton-Maryland (formerly Majestic) plant. The visitor center will reside in one of the existing buildings and is currently going through construction.

For the most part, 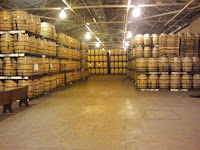 Truman was forthright and answered some aggressive questioning in an honest and open manner. When he couldn't answer the question directly, he made that known.

The tour finished up in the storage warehouse where pallets were stacked one on top of the other with barrels of bourbon stored upright. On the floor in the corner were five barrels of 14 year old bourbon ready for tasting. The particular group I associate with have purchased 15 barrels of bourbon in the last 2 1/2 years so this process was nothing new to us. It was new to Bowman as our group is the first to conduct an on-site pick of the new Bowman barrel selection program. We were thrilled that this tasting included a nicely aged selection. Truman popped the bung on the first barrel (like a pro, bung was out after two hits). He asked for volunteers for the second barrel to which I happily stepped forward and four strik 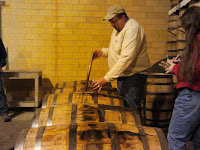 es with the wooden mallet on the barrel next to the bung hole produced the expected result. Each barrel was tasted at proof and again at 100 proof. These barrels would be bottled as John J. Bowman which is labeled at 100 proof. My personal preference would be to take it at barrel proof but at this time (repeat, at this time), that's not an option. After tasting through the barrels, a selection was made and now we'll discuss as a group on how to go forward.

During the tour Truman brought out three Bowman products; Bowman Brothers Small Batch (replaces Virginia Gentleman "The Fox"), John J. Bowman a single barrel and Abraham Bowman barrel strength. John J. and Abraham were both very nice both of which I purchased in the makeshift gift shop. I'll provide reviews in a separate blog entry.

I would like to thank Truman publicly for being a gracious host and taking the time to have lunch with the group after the tour and tasting. In spite of the crappy weather, it was a great day touring the distillery, tasting some great whiskey and socializing with likeminded dorks.