Evidently, Independent Stave is having issues keeping up with demand.  As a result, distillery's are negatively impacted with a barrel shortage. 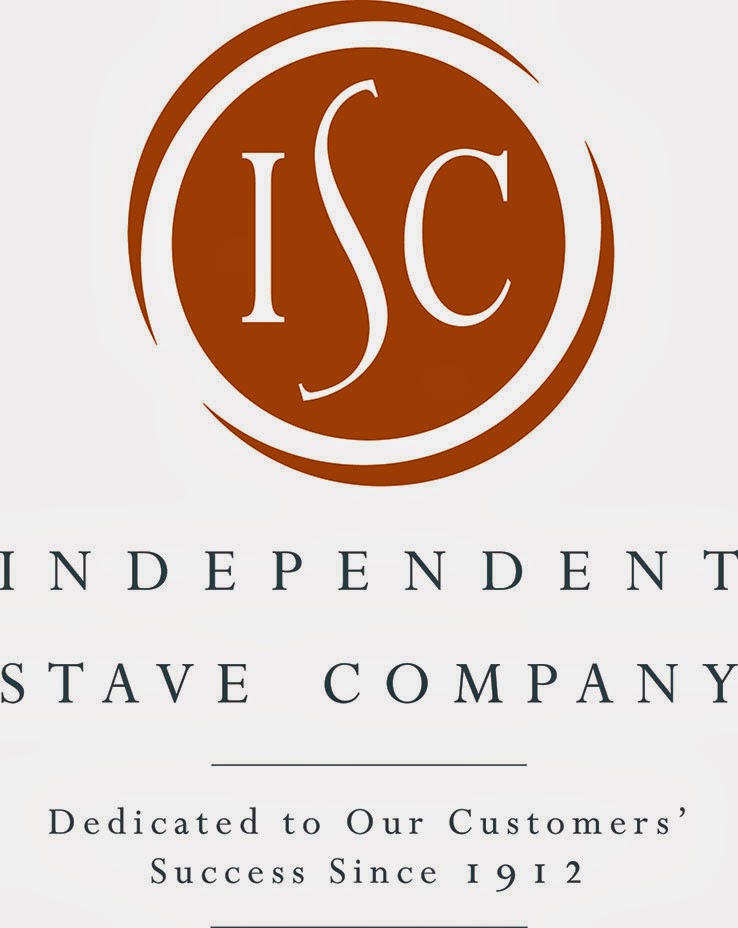 For those of you who do not know, ISC provides the barrels for most distillery's.  The exception would be Brown Forman who actually have their own cooperage formerly called Blue Grass  Cooperage but changed to Brown Forman Cooperage a couple years ago.

Jim Rutledge at Four Roses is faced with either shutting down, reducing output which means also cutting employee hours.  Not a good situation to be in.  Small micro distillers are pretty much shut out completely.  For the time being, Four Roses is operating on reduced production.  What this means in the short term is not much in my opinion but some years down the road...maybe something.

Let's hope the sourcing of American White Oak is only a temporary glitch for ISC and things get back on track soon.

On a more positive note, Four Roses has submitted their 2014 Limited Edition label to TTB noting the recipe as OESF and aged 11 years.  Rumor has it that aged whiskey is in limited supply at Four Roses but to be honest, I prefer their whiskey in the 8-12 year range.

As part of a larger whiskey enthusiast community, participating in tastings (both known and blind) and trading samples is part of sharing the passion.  Over the years I've acquired a rather large collection of sample bottles.  For many I know the provenance but for others, I have no idea.  The whiskey samples include bourbon, rye, craft, Scotch, Irish, Canadian and out of production.  I know I have a couple samples that date back to shortly after prohibition as well as older samples of Mt. Vernon Rye from the 30's, Very Old Fitzgerald from the 50's and Old Fitzgerald Bottled in Bond from the 50's 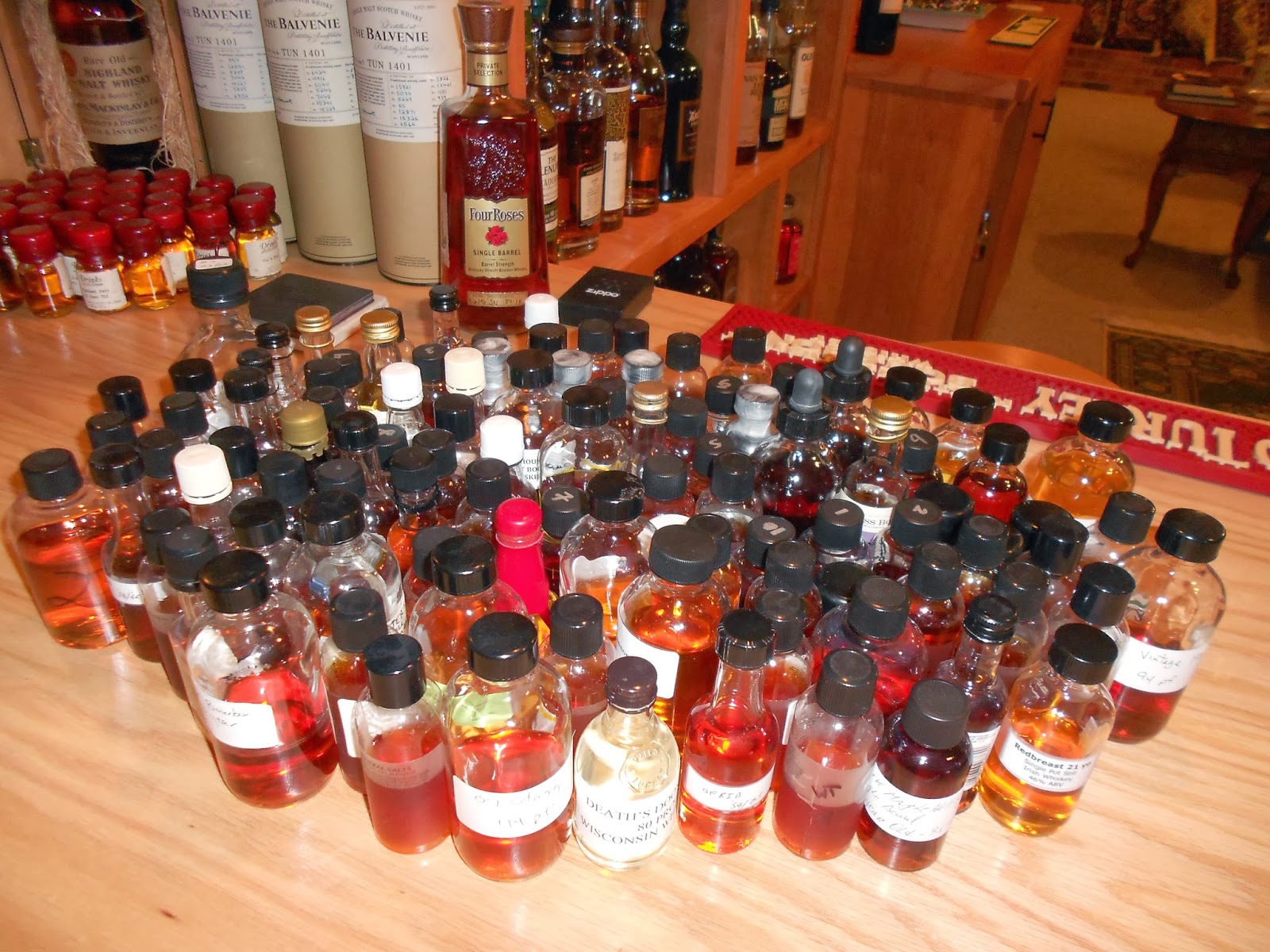 I've always intended to pull samples and go through them but my intentions have never materialized into actual execution.  I routinely attend tastings and we're always thinking of various themes to try. One recently focused on various expressions of Glenmorangie.  I'm planning a tasting for sometime this spring so I'm thinking of using these 2-4 oz sample bottles in a tasting where I may know the provenance or may not so basically a grab bag tasting.

The nice thing about swapping samples is trying expressions you may have never tried or don't want to invest the capital into a whole bottle.  A 2 or 4oz sample is a nice "try it" pour before committing.

Guess it's time to take stock of what I have and start digging in.
Posted by Greg at 4:59 PM 4 comments:

Spring on the Horizon

I hate winter....seriously......hate as in loathe.  This winter has been exceptionally harsh for the D.C. area.  I know, what we experience is nothing like upstate NY or other areas to the north but here in the mid Atlantic, this winter has dumped higher than average snow and the temperatures much colder than normal.  This morning as I left for work it was 5 degrees and that's just too cold. 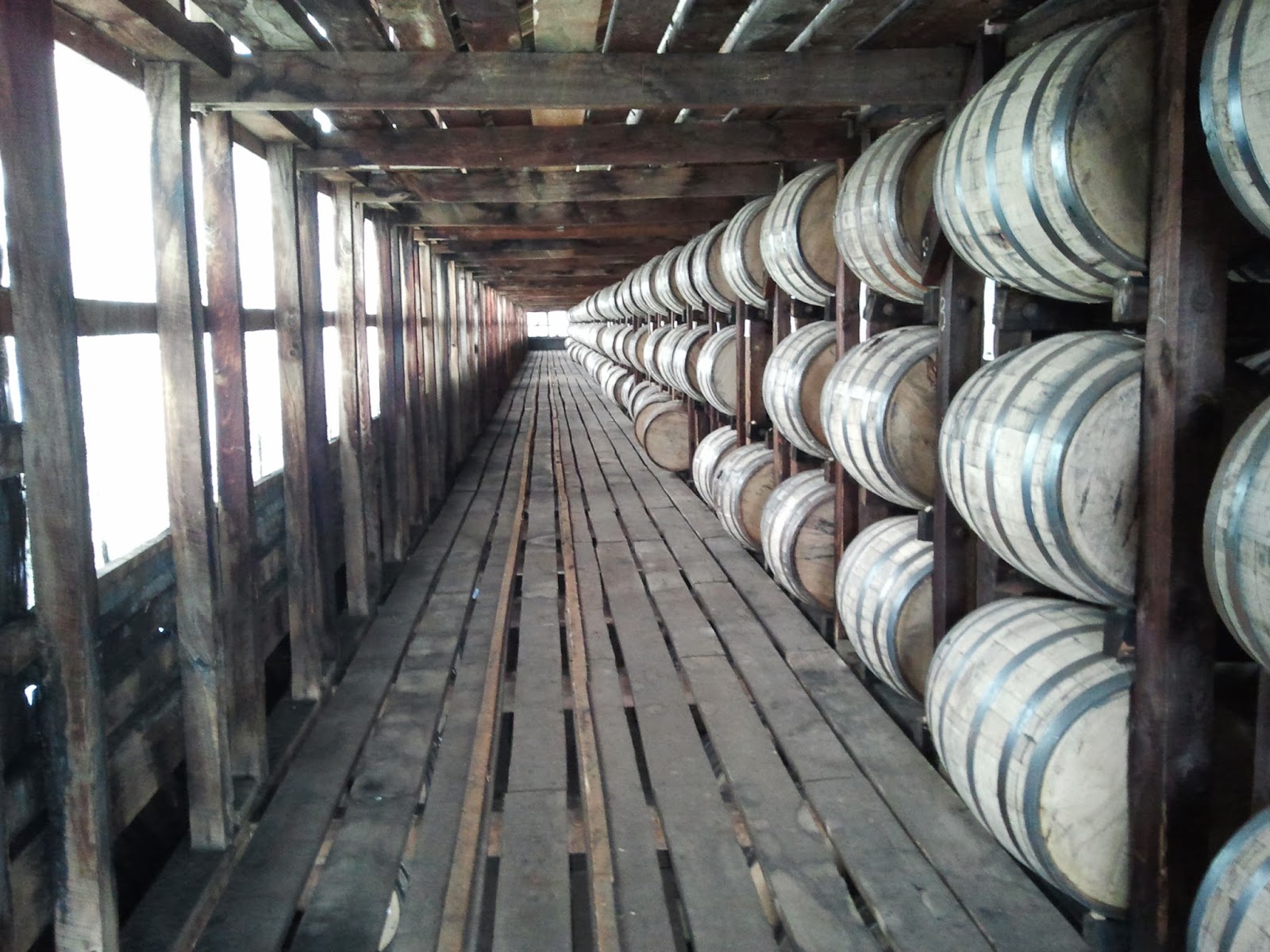 We're now in to March which means spring is about 2 weeks away.  Spring also means the annual visit to Bardstown KY for barrel picking.  That's right....the time has come once again to taste through wonderful barrels of bourbon.  The schedule is pretty much the same as previous years with the exception of skipping KBD as their barrel program is suspended for a spell until they get caught
up on their bottling backlog.  Next year. 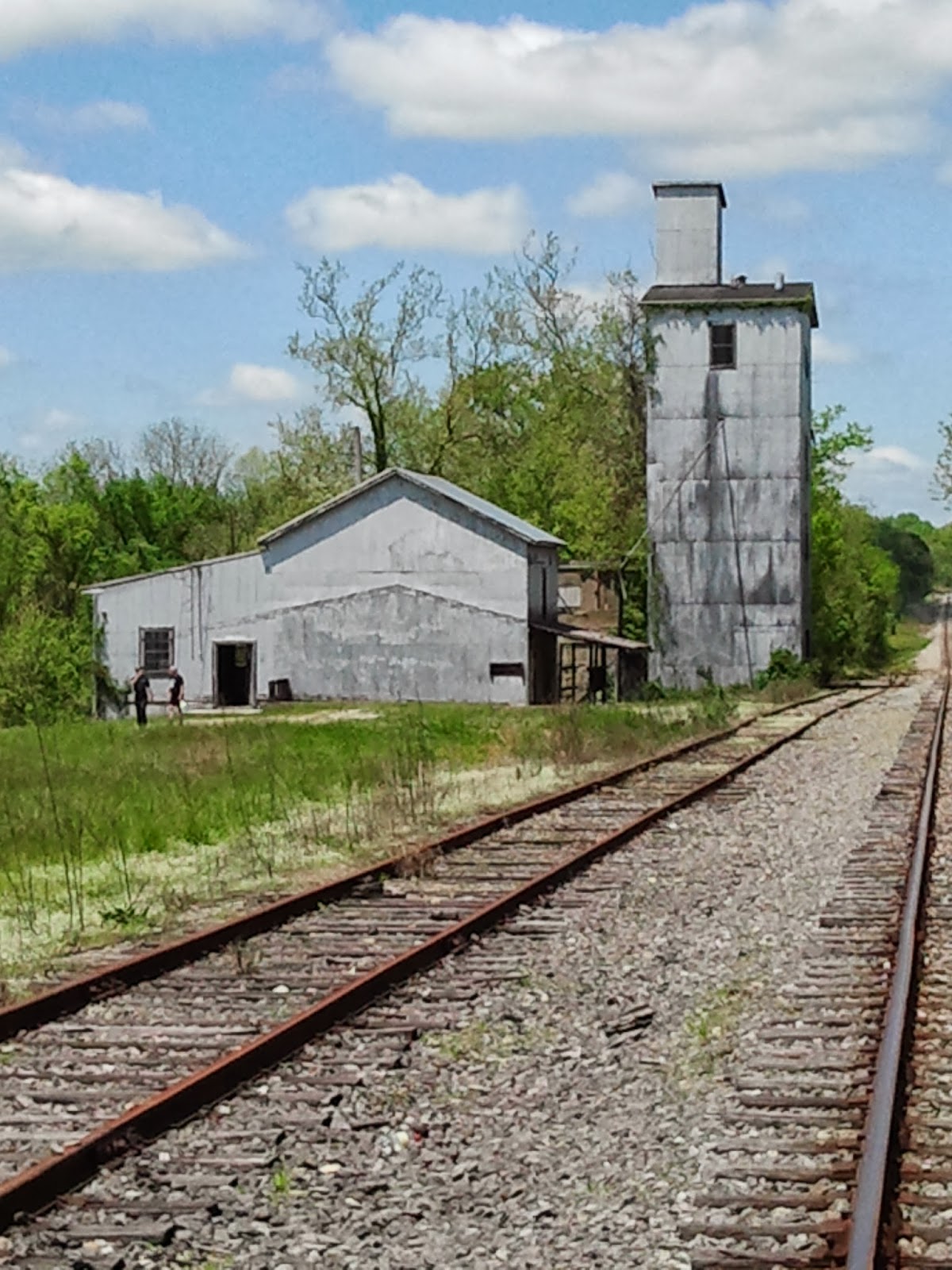 The schedule of events is firming up that includes a 35 bottle Wild Turkey tasting that pretty much encompasses every variant of Wild Turkey released over the last couple of decades.  We're visiting Four Rose, Buffalo Trace, Heaven Hill as well as hosting the
owner/distiller from Smooth Ambler while in KY to conduct a little barrel sample tasting one evening.  Speaking of Smooth Ambler, the group conducted a barrel tasting at the distillery in December and selected 3 barrels; 7 year, 8 year and a 10 year.  Those will be ordered this week and I should have them in hand next.  I'll post tasting notes once I get them.

Irish whiskey dates back quite a few centuries and in the 16th century Queen Elizabeth I was quite the fan of uisce beatha or "water of life". Peter the Great declared that of all the wines in Europe, Irish whiskey was the best. At a point in the 19th century, Irish whiskey took off on a global basis and 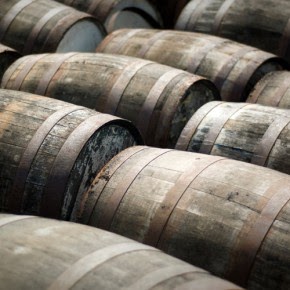 while competing with blended Scotch was considered the most popular.  In 1880 Irish whiskey was the most popular spirit in the world due in part to a devastating crop infection that almost wiped out the Cognac industry.

By the 20th century, Irish whiskey took a number of body blows that significantly interrupted growth and nearly killed it off.  The Irish War of Independence, English closing its market to the Irish, American prohibition which was particularly harmful as low grade bootleg whiskey was passed off as Irish whiskey and then World War 2 were just a few noteworthy events.  In 1880 there were approximately 160 distilleries in Ireland but by the end of WWII, only seven remained clinging to life.

At one point there were only three distilleries in operation in Ireland but since the late 20th century, Irish whiskey began gaining in popularity again.  Today there are seven distilleries with another nineteen either under application or in the process of build out. 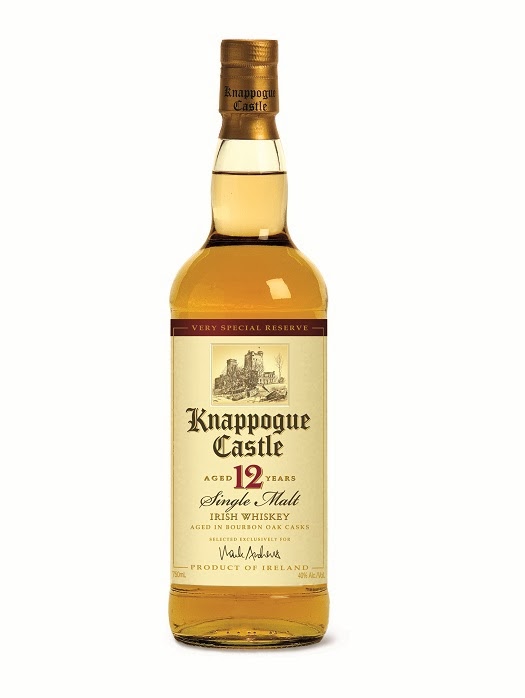 Knappogue Castle 12 year - this expression is one I've enjoyed over a couple of years.  I mentioned that Castle's Contarf could be distilled by Jameson but the reality is, it could be Bushmills as well since they triple distill.  No matter who distilled the whiskey, this expression is a light, smooth and somewhat creamy whiskey.  On the nose I pick up vanilla and mild oak and some citrus notes.  The entry is smooth, sweet and clean with moderate fruit and a honeyed quality to the finish which is medium in length.  I would consider this an nice entry level Irish whiskey which is no way detracts from its pleasant flavor.

Knappogue Castle 14 year Twin Wood- On the nose is toasted nut, sherry and summer fruit.  The entry has a bit more kick than the 12 year as it's bottled at 92 proof rather than 80.  On the palate I get a touch of bitterness like bitter chocolate, caramel, nut and some dark fruits from the Oloroso sherry cask.  The finish is moderately long with the sherry notes hanging on the palate to the end.  A very nice expression and one I'm glad to have in the bunker.

Knappogue Castle 16 year Twin Wood - The nose oak forward, dark fruits and vanilla.  Entry is slightly dry, dark fruits, caramel, oak with a buttery mouthfeel.  About mid palate I pick up a slight pepper and floral profile.  This whiskey has nice transitions, is full bodied and the 80 proof is tricky as the whiskey doesn't drink low proof.  This is a classy whiskey and now I'm on the hunt for a bottle of my own.

March 17th is St. Patricks day so maybe the Contarf or any of the Knappogue expressions above would be appropriate for celebration.