It's September 2006 and I'm in Kentucky attending the Kentucky Bourbon Festival. On this particular sunny day, I'm at the Jim Beam Distillery enjoying a tour with Fred Noe, the Brand Ambassador and a member of the Beam family (seventh generation). As we tour the facility, we enter the dump house where they are drilling out the bung of bourbon barrels and dumping the contents in troughs. Fred hands out small glasses and advises that if we want a taste, just slip the glass under the flow of bourbon comi

The news came out around mid summer of 2010 that Jim Beam was going to release a single barrel version but at the time, we really didn't know it was also going to be a higher proof. In October John Hansell did a review of the new Knob Creek Single Barrel Reserve 120 proof and rated it a 94. This is telling because the difference may not seem like much but it's actually two factors that set this apart from the normal Knob Creek Small Batch. Both version are 9 years old and of the same mashbill. Where they diverge is one being a single barrel and the other being a small batch. The single barrel is 120 proof and the small batch is 100 proof. To me, those are two big factors and the taste tells the rest of the story. Keep in mind, a single barrel of anything will vary from barrel to barrel so you may not get the same experience over multiple bottles. The small batch is supposed to have a more consistent flavor profile.

Color is moderate amber and very inviting to the eye. Nosing this bourbon it definitely has more complexity than the normal Knob Creek offering; aroma's of dried fruit, toffee, rye floral and oak. This bourbon has a very nice nose on it. Entry is bold, sweet with lively spice at mid palate. A nice mingling of flavors transitions to a finish that is actually quite long leaving a slight tingling on the lips. The finish fades to a creamy state with no bitterness. In the spirit of full disclosure, I have not been a fan of Jim Beam bourbon over the years and the only one that I can truly say that I like is a 1982 Jim Beam White. Well, that changed with this offering. The Knob Creek Single Barrel Reserve is a nice bourbon, pleasant to drink and is moderately priced at around $40. I feel the same way about this bourbon's price as I did the Makers 46; a little on the high side but still worth getting at least one bottle and give it a spin. 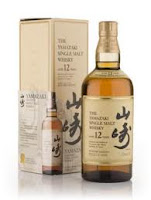 It's 1923 and Shinjiro Torii built the first single malt distillery (Suntory) in the river valley of Yamazaki in Kyoto Japan. This was a unique undertaking as this was the first distillery of its kind outside of Scotland. Using copper pot stills, Torii would have been pleased to know that his whisky would years later be recognized worldwide for its quality and uniqueness. Torii hired Masataka Taketsuru as his first Master Distiller who came to Suntory having learned whisky making skills in Scotland.

Surprisingly, Japan in the second largest producer of Single Malt Whiskey next to Scotland. There are about 10 distilleries in Japan today producing some outstanding examples of various whisky. Besides Yamazaki, a couple other are Yoichi, Hakushu, Nishinomiya, White Oak, and Miyagikyou. There are also a number of fabulous blends that come from various distilleries and companies that produce their own label.

The Yamazaki 12 year Single Malt Whisky comes in an attractive bottle with a screw top lid. The label looks like parchment with brown or dark red lettering.

I was excited to see my state's ABC begin carrying Japanese Whisky so I had to stop and pick up the Yamazaki 12 year, which was on sale for $42. A good price but I had yet to open and try it so my anticipation was running high. This is a medium bodied whisky, very honeyed on the palate with just a hint of peat and smoke on the finish. You all know I love bourbon, but this one really blew me away. It's an exceptional whisky for the money and one that I will keep on the bar or bunker on a regular basis. My curiosity is now piqued and I'll be looking for other Japanese expression throughout this year. My sister in law is travelling to Japan this spring so she'll be departing with shopping list in hand.

Oishii is Japanese for delicious.


Color: Looks like dirty water. Not an attractive color

Size: 750ml bottle with a twist off cap

Next stop…….home for a bourbon nightcap. Cheers.

It's the spring of 2010 and I'm visiting with a local friend and fellow whiskey enthusiast. It's a very pleasant day so we plant ourselves on the back patio shaded by a large umbrella to enjoy some libations and a cigar or two. My friend says "I want you to try something. I'm not going to tell you what it is, just see if you can guess". Ok, I'm always up to try some new whiskey, so he goes inside and comes out with a Glencairn filled with some sort of liquid delight. I nose it and can tell it's malted and is very reminiscent of Scotch. I say it's Scotch and he just shakes his head no (with a Cheshire grin on his face). Puzzled, I jump next door and say "Irish". Nope. I continue to nose and taste the whisky and then it hits me. I say "this can't be Indian". Yep. Since when does whisky like this come out of India! Well, now.

Amrut Fusion comes from the Amrut Distillery in Bangalore India and this particular whisky is a marriage of two different barley; Indian and Scottish (which is peated). This "fusion" works so well that Jim Murray awarded this the third best whisky of 2010. I'm no expert but this is an excellent whisky from a country that isn't known for top shelf whisky and my hope and prayer is that Amrut continues to turn out Fusion as well as other unique and distinctive offerings.

Finish: Sweetness drops off and the finish moves toward an earthy peaty profile, with a toasted/smoky oak ending

I'm not one for the smoke and peat flavor profile but Amrut uses these two components just to tease the palate; it's never overstated. This really is an excellent whisky so if you like to venture outside the norm, grab a bottle, it's a wonderful dram and not too harsh on the wallet.

Availability: Limited (somewhat due to popularity)

The sea of Scotch whisky available on the open market is staggering. On our previous trip to Ireland, I mentioned that there were 4 operational distilleries with a 5th projected to come online sometime in the near future. In Scotland, that number is somewhere around 125 distinct distilleries. With that many stills in operation, you can imagine the amount of hooch bei

ng produced year over year. My interest in Scotch is much more recent than my interest in bourbon (which is going on 28 years). My first introduction to Scotch was an Islay. For those that understand what that means, you can also understand what I didn't like; peat and smoke. Ugh. I'm really not interested in drinking something that is defined as having so many PPM of peat phenols. Do I really want to drink something with a name like "Peat Monster" or "The Smokey Peaty One". Maybe you do, but I do not. I'm more interested in definitions that include honey, floral, toffee, citrus, spice, etc. I'm not a big fan of big woody bourbons because the wood flavor dominates the whole experience. Same reason I don't want to drink the Peat Monster. For me, I'm looking for a balanced whisk(e)y so that's why I bypass Islay and focus on the Highlands, Speyside and Lowland.

Scotland is divided into 5 distilling regions; Islay, Highland, Lowland, Speyside and Campbeltown. For many non-Scotch drinkers, when you mention it, they immediately think of smoke or peat or both, I know I did. That is until I was introduced to a Dalwhinnie 15 year which is called "The Gentle Spirit" (yah, that's more my speed). Dalwhinnie is a single Highland Malt and is pretty darn tasty. The problem with Scotch as a whole, it's much more expensive than its bourbon cousin, so for many, Scotch is out of reach financially whereas bourbon is kind to the wallet.

For our stopover in Scotland, we're going to take a look at a unique Scotch that is reasonably priced, cask strength and super delicious. The aberlour a'bunadh is a Speyside Scotch and is released in batches and the one I'm reviewing comes from batch 29. This particular Scotch is big in flavor, has loads of sherry and is proofed at 119.8 which may not sound very high but coming from Scotland where the environment is more cold and damp than Kentucky, it's not a bad proof for an uncut whisky.

Finish: Fairly long with the alcohol continuing to play a part.

This is not a refined Scotch and I don't mean that in a negative way. It's supposed to be in your face and aggressive. It's similar to a big proof bourbon in that regard. I happen to like this Scotch very much and look forward to adding additional batches to the bunker.

Next stop, we head to India (I know, whiskey and India are not normally seen the same sentence) to experience a very nice whiskey; Indian style.